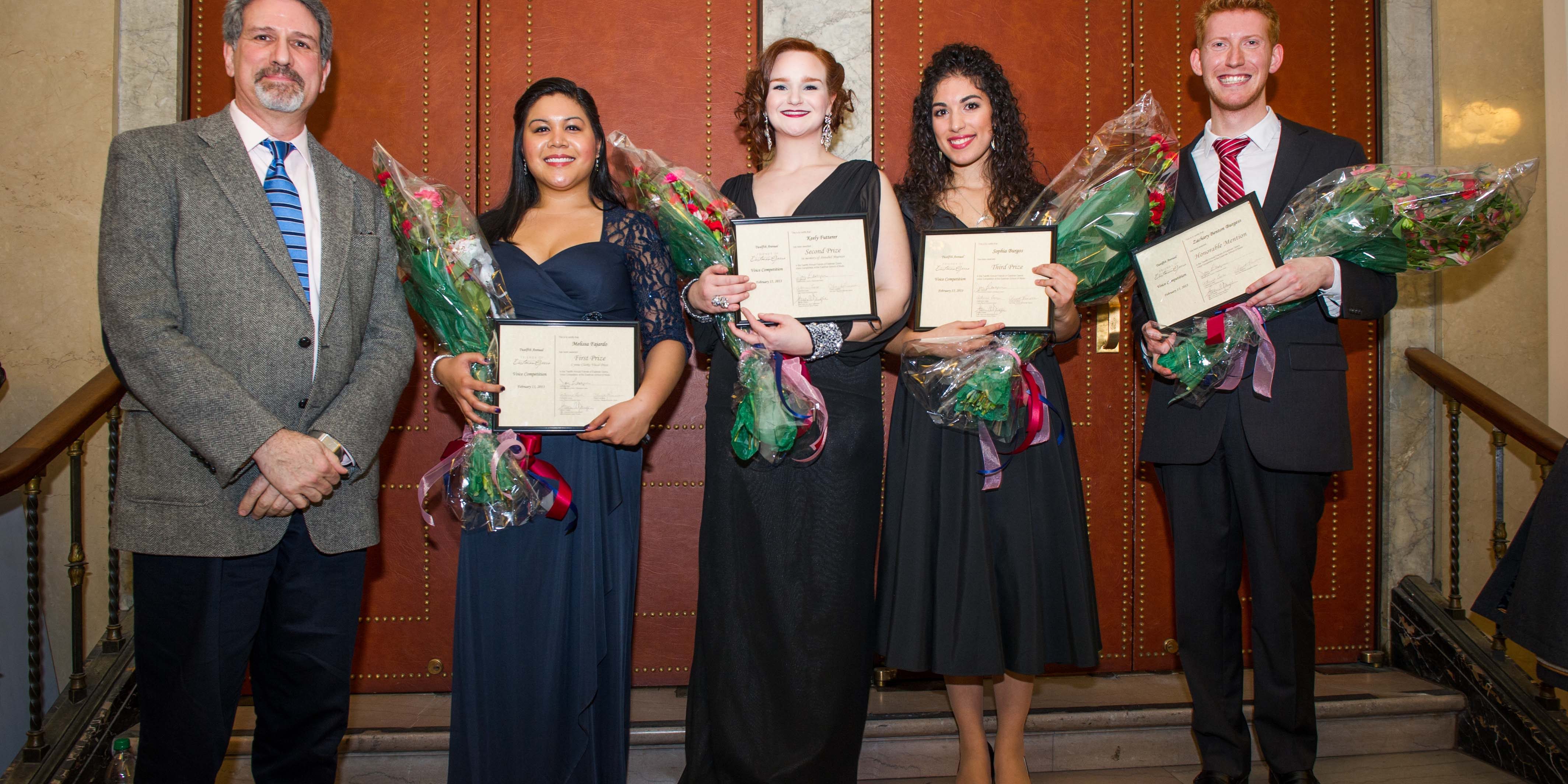 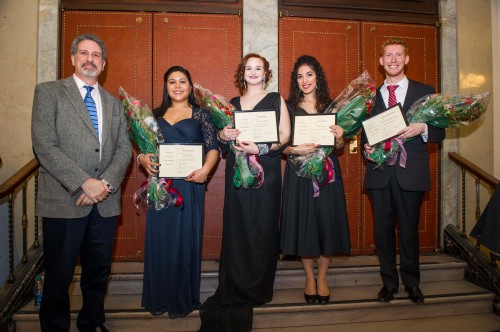 Soprano Keely Futterer was awarded second place and received the newly endowed Annabel Muenter Vocal Prize of $1,000, donated in memory of Ms. Muenter, a long-time member of the Friends of Eastman Opera who chaired the voice competition for many years. Soprano Sophia Burgos was awarded the third prize of $750, and bass Zachary Burgess received Honorable Mention.

The adjudicator for the competition was Jay Lesenger, general/artistic director of Chautauqua Opera since 1995. Lesenger first came to public attention when his production of Anna Bolena opened Beverly Sills’s first season as general director of the New York City Opera. He has staged almost 200 productions, ranging from the Classical period through Bel Canto to contemporary works. His reputation has led to important engagements with companies such as San Diego Opera, Opera Pacific, Pittsburgh Opera, Michigan Opera Theatre, and many others across the United States.

Fajardo is completing her master’s degree at Eastman. Her most recent credits include the title role in The Rape of Lucretia, Rosina in Il barbiere di Siviglia, and Mère Jeanne in Dialogues of the Carmelites. Fajardo has participated as a Young Artist at the Brevard Music Center and The CoOPERAtive Program. In the summer of 2013, Fajardo will be a Young Artist at the Opera Theatre of St. Louis and Opera North. She will be joining Portland Opera as their Mezzo Resident Artist for their 2013-2014 season.

Futterer is a first-year master’s degree student. On stage since she was six, Futterer recently performed Cunegonde in Candide, Mabel in Pirates of Penzance, and the Queen of the Night from Die Zauberflöte twice. She won the Trinity UM Collegiate Award, the Encouragement Award at the Arkansas MET audition, was a two-time finalist at the Tulsa Rotary Crescendo Awards, and was a featured soloist with the Arkansas Symphony Orchestra.

Burgos is pursuing a bachelor’s degree in vocal performance and music education. Her roles have included Emma Goldman in Eastman Opera Theatre’s Assassins. Burgos has performed in the Elysium Festival in Bernried, Germany, since 2011. In 2012, she won the Eastman Concerto Competition for her performance of Barber’s Knoxville: Summer of 1915. She will perform with the Eastman Graduate Chamber Orchestra in March 2013. Burgos regularly performs with various new music ensembles, such as Ossia and Musica Nova.

Burgess, who received his bachelor’s degree from the Boston Conservatory, is currently pursuing graduate studies.  He was named a 2011 National Finalist in the Classical Singer Competition. He was selected to participate in representing Eastman in the Kennedy Center’s Conservatory Project and was also awarded a Colburn Fellowship to take part in SongFest 2012. Recent credits include Sarastro in Mozart’s Die Zauberflöte with Opera Del West, Keçal in The Bartered Bride, Collatinus in The Rape of Lucretia, and Zoroastro in Orlando with Eastman Opera Theatre. Upcoming engagements include Jesus in Bach’s St. Matthew Passion and Frank Maurrant in Street Scene.