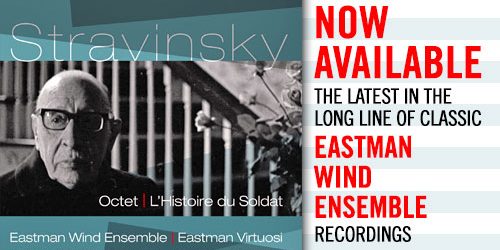 Harking back to a golden era in recording – when the ensembles of the Eastman School of Music made dozens of pioneering LPs for the Mercury Living Presence label – the Eastman Wind Ensemble and Eastman Virtuosi team to release an all-Stravinsky album on Avie Records on February 12. The Eastman Wind Ensemble, traditionally a group reserved for superior student performers, plays Stravinsky’s Octet on the recording, which is the ensemble’s first Avie release and marks the ensemble’s 60th anniversary. The album also features the Eastman Virtuosi, made up of renowned faculty members of the Eastman School, performing L’Histoire du soldat (The Soldier’s Tale); longtime New York City Opera artist Jan Opalach narrates the story along with portraying the folk tale’s two protagonists: Joseph the Soldier and the Devil. The conductor for both works is Mark Scatterday, who continues in a prestigious lineage as only the fourth conductor in the history of the Eastman Wind Ensemble.

Stravinsky’s music figured early in the Eastman Wind Ensemble’s history. His Symphonies for Wind Instruments was performed on a 1951 program conducted by Frederick Fennell that led to the establishing of the Eastman Wind Ensemble, which went on to be dubbed “America’s premier wind band” by Fanfare and whose recordings were lauded by The New York Times for their “insightful, passionate readings.” In 1966, the 83-year-old Stravinsky made his sole visit to the Eastman School, overseeing performances of several of his works. Available on CD and download, including at Amazon, this Avie release is the first recording the Eastman ensembles have made in the new rehearsal hall of the Eastman East Wing.

Stravinsky’s first professional conducting job was leading the premiere of his Octet, in 1923 at the Paris Opera. This Octet was one of the first works in the neoclassical style that Stravinsky would explore for two decades, employing the forms of Baroque and Classical music. To 21st-century audiences, the Octet is ear-tickling and charmingly fractured, as tart and tasty as a lemon drop. The composer’s own attitude was more severe, as he used the piece as a manifesto of the elements he prized: clean lines, airy textures, lack of rubato. He had distaste for “interpretation” (indicated by the paucity of expressive and dynamic markings in this score); he insisted that the Octet was “a pure structure in sound.” Jean Cocteau, writing about the premiere, captured this when he described seeing Stravinsky conduct his Octet: Cocteau saw “the back of an astronomer engaged in solving this magnificent instrumental arithmetic with its figures of silver.”

During World War I, Stravinsky and his family left France and lived in Switzerland, where the composer met the writer Charles-Ferdinand Ramuz. The two men had the idea of creating a theater piece simple enough to be performed on a platform stage by just a few actors and musicians – the better to be performed during the privations of war. Taking his cue from Russian fairy-tale characters suggested by Stravinsky, Ramuz wrote The Soldier’s Tale – a miniature Faust “to be acted, danced and played,” in which the Devil makes his infernal deal with a young Soldier. Stravinsky provided a virtuosic score for a carefully calibrated mini-orchestra: two each of winds (clarinet and bassoon), brass (trumpet and trombone) and strings (violin and bass), plus a busy percussionist. The percussion represents the Devil, while the violin represents the Soldier and his soul. This Europeanized Dixieland band produced a spare, sardonic sound and provided Stravinsky with a surprising variety of instrumental colors and the means to draw on different musical genres: Lutheran chorales, ragtime, tangos, gypsy music, waltzes. One can see the interest an expatriate composer might have in this simple but powerfully symbolic story. Stravinsky himself avoided the Soldier’s fate: Apart from an official visit to the U.S.S.R. in 1962, he never crossed back over the border to his home, returning to France in 1920 and becoming an American citizen in 1945.

The Eastman Wind Ensemble has been at the forefront of elevating the wind repertory through recordings since it was founded by Frederick Fennell at the Eastman School of Music in 1952. The Ensemble has made dozens of recordings on the Mercury, Sony, Warner Brothers and Summit Records labels; it has premiered more than 150 new works. Comprising a core of about 50 undergraduate and graduate students, the Ensemble regularly tours across the country and abroad. The group’s recent recordings include trumpet concertos by Dana Wilson, Eric Ewazen and Jacques Hétu  with soloist James Thompson (Summit Records, 2005) and Manhattan Music (Opening Day, 2008) with the Canadian Brass, which was nominated for a 2009 Canadian Juno Award.

Jan Opalach was a principal artist of New York City Opera for 30 years, performing the title roles in Le nozze di Figaro and Falstaff plus key roles in L’elisir d’amore, Don Giovanni, Il barbiere di Siviglia, The Cunning Little Vixen and Zimmermann’s Die Soldaten. He has also appeared with the Metropolitan Opera, Opera Theater of St. Louis, Santa Fe Opera, Seattle Opera, Washington Opera, Canadian Opera Company and English National Opera. He has been heard in recital at Lincoln Center’s Alice Tully Hall, Morgan Library, Amsterdam’s Concertgebouw, the Library of Congress, Harvard University and the Eastman School of Music, where he has been a faculty member since 2008. Opalach’s recordings range from Bach and Haydn to Stravinsky and Elliott Carter.

Only the fourth conductor in Eastman Wind Ensemble history, Mark Davis Scatterday led the group on a 2004 tour to East Asia and conducted the group in a highly acclaimed 2005 performance at Carnegie Hall. In 2009, the Scatterday and the Ensemble performed at the Midwest Clinic in Chicago to an audience of more than 4,000. In 2010, Scatterday conducted the New World Symphony in Miami, returning the next year for a concert in the orchestra’s new Frank Gehry-designed Symphony Hall. An advocate of contemporary music, especially that of Karel Husa and Roberto Sierra, Scatterday has commissioned, premiered and recorded more than 25 works. Along with the Eastman Wind Ensemble’s recent albums Danzante and Manhattan Music, Scatterday recorded Barcelonazo with Eastman Musica Nova, a Bridge Records release nominated for a 2008 Latin Grammy.