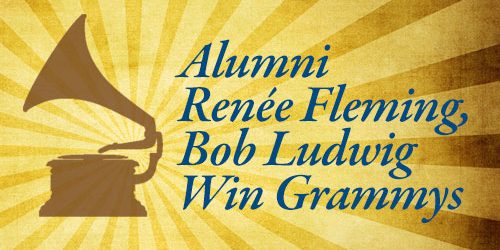 Fleming was awarded her fourth Grammy for Best Classical Vocal Solo award for Poèmes, her album of four French orchestral song cycles. Ludwig, who is the recipient of a Latin Grammy as well as two other Grammy awards, was the mastering engineer for Babel, the Album of the Year winner by Mumford & Sons.

Poèmes features Ravel’s 1903 work Shéhérazade; Messiaen’s 1936 Poèmes pour mi; Dutilleux’s Deux Sonnets de Jean Cassou, written for voice and piano in 1954, and orchestrated by Dutilleux for this recording; and Dutilleux’s Le temps l’horloge, which was written for Fleming in 2009.  The album was recorded with the Orchestra National de France and Orchestre Philharmonique de Radio France under conductors Seiji Ozawa and Alan Gilbert.

Ludwig was competing against himself in the Album of the Year category; he was also the mastering engineer on the nominated album Blunderbuss.  He is the recipient of Best Surround Sound Album Grammys for Brothers in Arms: 20th Anniversary Edition and Layla and Other Assorted Love Songs, as well as a Latin Grammy for No Es Lo Mismo.

Before opening up his own business, Gateway Mastering Studios, Inc., in 1993, Ludwig worked at A&R Recording, Sterling Sound, and Masterdisk Corporation.  He has done projects with such artists as The Band, Jimi Hendrix, U2, Phil Collins, Sting, The Police, Bryan Adams, Barbra Streisand, Neil Diamond, and many more. He has mastered countless Gold and Platinum records and won numerous TEC (Technical Excellence and Creativity) Awards.