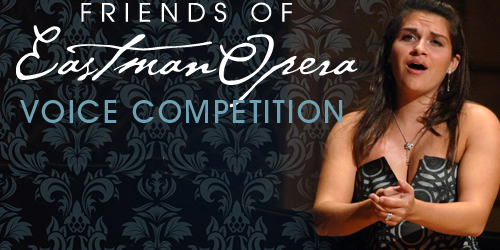 Ten voice and opera students from the Eastman School of Music will compete in the finals of the Friends of Eastman (FEO) Opera Voice Competition at 8 p.m. Friday, Feb. 15, in Kilbourn Hall. The annual event, which is free and open to the public, gives local audiences the opportunity to hear rising vocal talents early in their careers while providing singers the chance to compete for cash prizes and perform for a recognized conductor, stage director, or impresario serving as judge.

This year’s adjudicator is Jay Lesenger, general/artistic director of Chautauqua Opera since 1995. Lesenger first came to public attention when his production of Anna Bolena opened Beverly Sills’s first season as general director of the New York City Opera. He has staged almost 200 productions, ranging from the Classical period through Bel Canto and to contemporary opera works. His reputation has led to important engagements with companies such as San Diego Opera, Opera Pacific, Pittsburgh Opera, Michigan Opera Theatre, and many others across the United States. He made his European debut directing Pucchini’s La Boheme for Opera Nordfjord in Norway.

For the competition finals, singers prepare three arias in two different languages; each sings a work of his or her choice, with the adjudicator picking the second aria. The top three winners will be announced at the end of the recital and will receive prizes totaling $3,250. The first prize of $1,500 is the Lynne Clarke Vocal Prize, donated by Friends of Eastman Opera founding member John Clarke in memory of his wife. The second place winner will receive the newly endowed Annabel Muenter Vocal Prize of $1,000, donated in memory of Ms. Muenter, a long-time member of the Frieds of Eastman Opera who chaired the voice competition for many years. Third place carries a prize of $750.

A reception open to everyone will be held on the Cominsky Promenade following the competition.

This year’s finalists are:

The Friends of Eastman Opera is a volunteer group that supports Eastman opera students, programs, and productions, and promotes Eastman Opera Theatre in the Rochester community.