Alarm Will Sound Brings ‘1969’ to Kodak Hall at Eastman Theatre 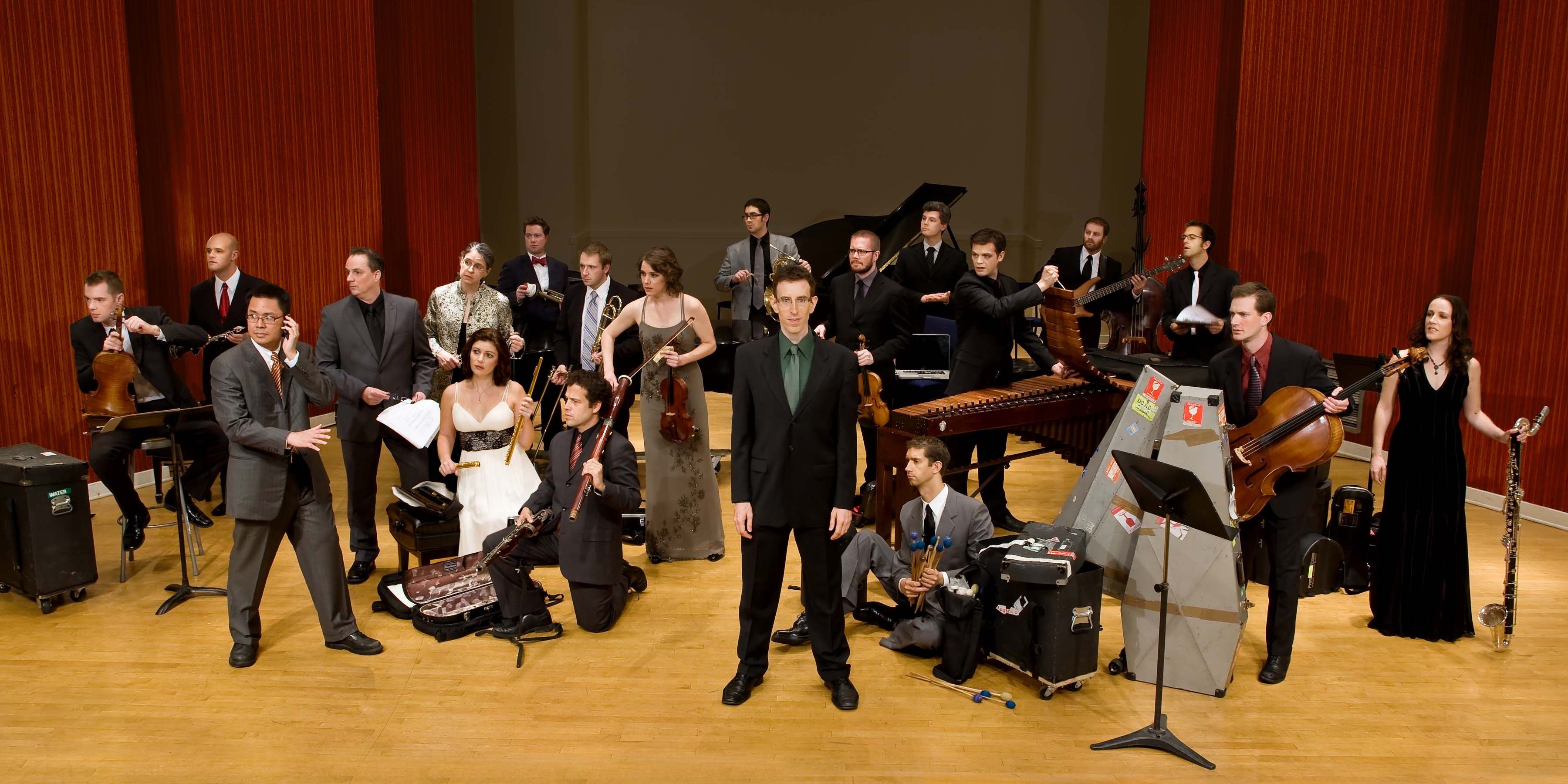 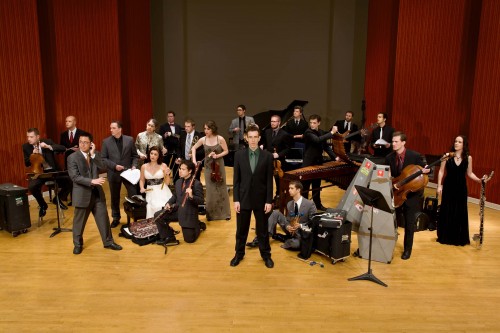 Rumors of a meeting between the Beatles and Karlheinz Stockhausen – icons of 1960s rock and avant-garde composition, respectively – are untrue, even though Stockhausen appears on the cover of the group’s Sgt. Pepper’s Lonely Hearts Club Band album and the composer’s Hymnen echoes in John Lennon’s Revolution 9.

But the idea of the-meeting-that-never-was is the jumping-off point for 1969, a multimedia work showing connections among the music, politics, and culture of a turbulent decade. An original production by Alarm Will Sound, the contemporary New York City-based ensemble which got its start at the Eastman School of Music, the work will be presented in Kodak Hall at Eastman Theater at 8 p.m. on Tuesday, Feb. 19.

1969 is an ambitious cover of the Beatles, of Leonard Bernstein, contemporary composers Stockhausen and Luciano Berio, and John and Yoko. Three on-stage screens project stills and videos of the era’s tumultuous events, including civil rights riots, the Vietnam War, and the assassinations of Martin Luther King and Robert F. Kennedy. Actors deliver lines based on interviews and writings by Lennon, Stockhausen, and Berio. Ensemble members not only play their instruments, they sing and act, too, using the words of the decade’s cultural and historical figures.

“1969 started with the idea of taking a single year and looking at everything that was happening in the musical world and in the world in general at that time,” said Alan Pierson DMA ‘06, Alarm Will Sound’s co-founder, artistic director, and conductor, speaking in a 2011 video when the production was presented in New York City.  “The amount of different kinds of music in 1969 was really exciting and it seemed to be the point at which connections between popular music and art music were being formed.

“The story of a meeting between the Beatles and Stockhausen, each at the height of their fame, to plan a joint concert seemed rich with possibilities,” said Pierson, who is also artistic director of the Brooklyn Philharmonic. “But there is also poignancy in the fact that this never happened. That became a metaphor for all the disappointments of the late 1960s, including the dreams of a new world that ended up not being realized in the way that people at the time envisioned.”

1969 includes selections from the Beatles’ A Day in the Life and Tomorrow Never Knows; Bernstein’s Mass, arranged by Gavin Chuck PhD ‘04 and Stefan Freund MM ’99, DMA ’02; Stockhausen’s Hymnen and Gesang der Jünglinge, a work that fascinated Paul McCartney; Berio’s unperformed 1963 opera Traces, a work about the politics of race, arranged by Payton MacDonald MM ’99, DMA ’01 and Courtney Orlando; and Berio’s arrangements of Beatles songs.  The recorded sound effects, samples, and tape loops of Lennon’s Revolution 9 are performed live by the musicians, translated into instrumental lines, noise, and speech in an arrangement by Matt Marks BM ’02.

1969 was created and developed by Pierson, Nigel Maister, director of the International Theatre Program of the University of Rochester, and writer Andrew Kupfer, with projection design by Peter Nigrini and Dan Scully.

“The Future of Classical Music”

Alarm Will Sound started as an offshoot of Ossia, a student-run new music ensemble at Eastman founded by Pierson and Chuck, to keep ensemble members working together and performing new music in the professional world. Alarm Will Sound gave its first concert, a composer portrait of Steve Reich, in 2001 at Miller Theatre in New York City.

Described by the New York Times as “the future of classical music” and “the very model of a modern music chamber band,” Alarm Will Sound has built a reputation for its innovative and energetic performances of demanding works. The group fosters close relationships with contemporary composers, commissioning and premiering works by such composers as Reich, Augusta Read Thomas, David Lang, Anthony Gatto, Wolfgang Rihm, and others. Its repertoire ranges from European to American works, from arch-modernist to pop-influenced.  In 2006, ASCAP (the American Society of Composers, Authors and Publishers) recognized the ensemble’s contributions to new music with a Concert Music Award.

Alarm Will Sound members, more than half of whom are Eastman graduates, are also musicians and teachers around the country. Their Feb. 19 presentation of 1969 in Kodak Hall marks the ensemble’s first performance in Rochester since they appeared in Kilbourn Hall in December 2006. While at Eastman, members of the group will also hold a workshop with Eastman students.

Alarm Will Sound: 1969. Musical and visual collage of the music, politics, and ideas of the 1960s, with arrangements of music by the Beatles, Stockhausen, Berio, Bernstein, and others.