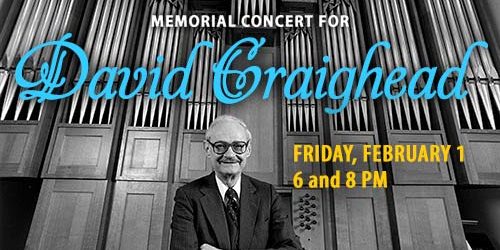 Eastman School of Music alumni speakers and performers will pay tribute to legendary faculty organist David Craighead in a progressive recital scheduled on Friday, Feb. 1. Performances will be presented on the two instruments that bear his name at 6 p.m. at Christ Church, 141 East Ave., and at 8 p.m. at St. Paul’s Episcopal Church, 25 Westminster Rd.

Craighead, who died on March 26, 2012, at the age of 88, was a revered teacher and musician.  He joined the Eastman faculty in 1955 and served as Professor of Organ and Chair of the Organ Division of the Keyboard Department until his retirement in 1992.  Many of his students went on to hold positions in colleges and churches across the country. Professor Craighead was also organist of St. Paul’s Episcopal Church in Rochester from 1955 to 2003.  He was named Professor Emeritus at Eastman and Organist Emeritus at St. Paul’s when he stepped down.

A renowned recitalist, Professor Craighead performed throughout the United States and Europe, receiving critical acclaim from such publications as the Los Angeles Times, which called him “an artist with few peers and no technical Alps left to scale,” and the New York Times, which said that “Craighead represents the American school of organists at its finest.” He received a teaching award from the Eastman School of Music, was named International Performer of the Year in 1983 by the New York City chapter of the American Guild of Organists, and was awarded an honorary Fellowship in the Royal College of Organists, London, England.

Performers for the memorial concert include Dean Billmeyer, head of the organ and harpsichord program at the University of Minnesota; J. Melvin Butler, canon musician of Saint Mark’s Episcopal Cathedral, Seattle; Susan Ferré, director of music for Music in the Great North Woods in New Hampshire; Cindy Lindeen-Martin, minister of music at Augustana Lutheran Church, Denver; David Mulbury, professor emeritus of music history and composition at the College-Conservatory of Music, University of Cincinnati; and William Trafka, director of music at St. Bartholomew’s Church, New York City.

The concert-progressive recital is open to the public. A reception will follow the second concert at St. Paul’s Episcopal Church.