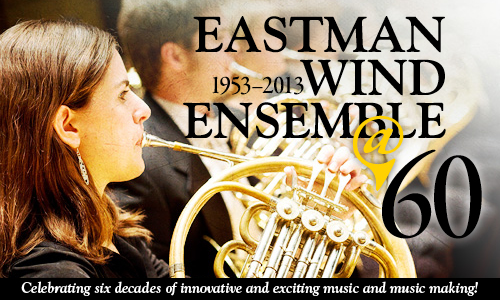 When the Eastman Wind Ensemble takes to the Kodak Hall stage at 8 p.m. on Friday, Feb. 8, they’ll present a program that includes works by Mozart and Stravinsky. It’s a link to the ensemble’s beginnings six decades ago: a 1951 concert, featuring Stravinsky, which gave birth to the wind ensemble idea, and its 1953 inaugural concert with Mozart on the program.

In the ensuing 60 years, the Eastman Wind Ensemble has defined “wind ensemble” and been the pioneering model for other groups.  Its history of illustrious recordings and commissioning of new works, coupled with concert tours and appearances, established and spread the group’s reputation worldwide.

That distinguished tradition will be celebrated at the Eastman School of Music Feb. 6 through 9, when the Eastman Wind Ensemble marks its 60th anniversary and looks to its future with public concerts, master classes, visits by guest artists and scholars, and the release of its newest CD, Stravinsky: Octet; L’histoire du Soldat.

“It is an exciting time for all of us connected to the Eastman Wind Ensemble to celebrate this important milestone,” said Mark Davis Scatterday, conductor of the Eastman Wind Ensemble and chair of the Conducting and Ensembles Department.  “Essentially, it is a celebration of all of the world’s wind ensembles, which grew from the model and philosophy that Frederick Fennell put forth 60 years ago and Donald Hunsberger developed to international acclaim. It started a powerful and long-lasting legacy in wind and percussion music, changing the way the music world viewed the ‘concert band’, especially the many great composers who have written serious concert music for this ensemble ever since.”

The anniversary celebration kicks off on Wednesday, Feb. 6, with a performance by the Eastman Wind Orchestra. Concurrent with the celebration, the 5th annual Frederick Fennell Memorial Conducting Masterclass for symphony and wind orchestra conductors held in conjunction with the Conductors Guild, will take place at Eastman.

The Eastman Wind Ensemble’s celebratory concert on Feb. 8 features the world premieres of two works: Mambo Metallico by Robert Sierra, and Wind Religion, a work expressly composed for the 60th anniversary celebration by Douglas Lowry, the Joan and Martin Messinger Dean of the Eastman School of Music. Together with Mozart’s Serenade No. 10 and Stravinsky’s Symphonies of Wind Instruments, the concert repertoire illustrates the diversity of the ensemble’s programs, which cover everything from classics by European masters to contemporary American works, from Sousa marches to commissioned pieces.

Visitors during the anniversary celebration include Mozart scholars Neal Zaslaw and Michael Votta and Stravinsky scholar Robert Wason. Later in the month, Cincinnati Symphony and Pops Orchestra Principal Trumpt Robert Sullivan will be guest artist-in-residence from Feb. 22 to 27.

The Eastman Wind Ensemble was the brainchild of conductor Frederick Fennell, who as a student at Eastman in the 1930s started a concert band. As a faculty member 20 years later, Fennell launched his vision of the wind ensemble, which ran counter to the symphonic bands at the time.

Symphonic concert bands were large, numbering as many as 100 members, with several musicians on the same instruments playing the same part.  Fennel eschewed this emphasis on doubled organization in favor of a smaller, revolving group of about 50 musicians, with each ensemble member playing an individual part of the music.

The concept gave composers creative opportunities to shape works to the sonorities of the leaner wind ensemble. In commissioning new pieces specifically for this nimbler type of musical group, Fennel and the Eastman Wind Ensemble expanded and helped develop the wind symphony repertoire, which at the time consisted mostly of transcriptions and arrangements of the classics or marching band works. Since its founding, the ensemble has premiered more than 150 new works.

The groundbreaking concept wasn’t immediately accepted. Describing his correspondence with Fennell about the Eastman Wind Ensemble, musicologist David Whitwell wrote, “I recall it was a forbidden subject while I was a student at The University of Michigan in 1955-1959. In fact I recall a party at the horn professor’s home in which he played some of the recordings and implied that we were doing this at his home as he was under some hesitation discussing the subject at school.”

Nevertheless, Fennel’s vision and the Eastman Wind Ensemble thrived, spurred in part by those very recordings.  The ensemble released its first album in 1953, the same year as its first public concert. Those Mercury label albums of the 1950s and early 1960s are notable for their pioneering use of binaural, stereo, and 35mm recording techniques.  Under conductor Donald Hunsberger, who led the ensemble from 1965 to 2002, the ensemble did quadraphonic and digital recordings on the Deutsche Grammophon, Phillips, CBS Masterworks (now Sony Classical), Toshiba EMI, Tioch (now KEF), Vox, Centaur, and Desto labels.

The ensemble’s discography of 40 releases includes Carnaval, featuring Wynton Marsalis on cornet performing a range of works from classical to gospel. The CD earned a 1987 Grammy nomination.  The ensemble’s recording Manhattan Music, done with the Canadian Brass, was nominated for a 2009 JUNO award, Canada’s equivalent of the Grammys.

The Eastman Wind Ensemble’s next release, scheduled for Feb. 12, is with the London-based Avie Records. Stravinsky: Octet; L’histoire du Soldat features two seminal works by the composer. His Octet is performed by the wind ensemble, while Eastman Virtuosi, made up of the School’s faculty members, performs A Soldier’s Tale, with Assistant Professor of Voice Jan Opalach delivering the narration.

Early on, the Eastman Wind Ensemble raised its profile with numerous performances outside Rochester. In 1954, the group appeared in Chicago’s Orchestra Hall at the biennial conference of the College Band Directors National Association (CBDNA).  In 1961, the ensemble made its Carnegie Hall debut, returning to the venue in 2005 for another CBDNA conference.

In between, EWE made numerous appearances outside of Rochester that included festivals, music education conferences, and a 1968 cross-country tour. In 1978, the same year of its debut performance in Alice Tully Hall in Lincoln Center, the ensemble made its first international tour, traveling in Japan and Southeast Asia.

Then, in 1990, the Eastman Wind Ensemble made its first of six biennial tours of Japan and the Far East, receiving Osaka Symphony Hall’s Crystal Prize for best performance for its 1994 concert.  The group returned to Japan in 2004, and in 2009 did a Midwest Tour as part of its standing-ovation appearance at the prestigious Midwest Clinic in Chicago.

For more information on the Eastman Wind Ensemble and its 60th Anniversary Celebration, visit the group online at www.esm.rochester.edu/ewe .