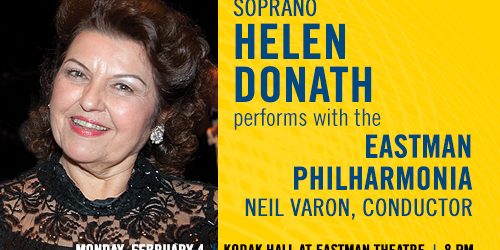 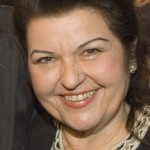 Soprano Helen Donath, whose distinguished career spans more than five decades and continues to elicit critical acclaim, will join the Eastman School of Music’s Philharmonia, under conductor Neil Varon, for a performance of Mahler’s Symphony No. 4 at 8 p.m. Monday, Feb. 4, in Kodak Hall at Eastman Theatre.

Donath, who just gave a recital on Jan. 27 in Miami Shores, Fla., made her concert debut in New York in 1958. Four years later, she made her opera stage debut at the Cologne Opera in 1962. She was a member of the Hanover Opera House from 1961 to 1968, appeared in Mozart operas, lieder evenings and concerts in the Salzburg Festival from 1967 to 1976; and from 1970 to 1990 was a regular member of the Vienna State Opera. She made her United States opera debut in 1971 in Chicago, her Covent Garden debut in 1979, and her Metropolitan Opera debut in 1991. In 2006, she was Despina in Cosi fan tutte at the Vienna State Opera, Salzburg Festival, and other places.

When she performed Mrs. Grose in The Turn of the Screw in 2011, Opera Magazine noted that at 70 years old Donath “was not only performing the role for the very first time, but was returning to the venue where, as a young singer at the opera studio, she had embarked on her career. She could still easily sing the part of the Governess, as she did years ago under Colin Davis, since her voice still commands exemplary clarity, freshness and range; nonetheless, the passage of time has brought her to Mrs. Grose, and hers was a remarkably compelling interpretation.”

In addition, Donath has sung principal roles at the Florida Grand, Seattle, Washington and Atlanta Operas, Michigan Opera Theatre, and Opera Pacific. She has given acclaimed recitals in New York, Miami, Washington, D.C., San Diego and Toronto, and sung with such orchestras as the Chicago Symphony under James Levine and the Boston Symphony under Leonard Slatkin as well as with conductors such as Wolfgang Sawallisch and Herbert von Karajan.

Donath appears on more than 100 recordings and has been named a Kammersangerin, the highest honor a singer can earn in Germany or Austria. While at Eastman, Donath will give a voice master class the day after her performance.

The Eastman Philharmonia, under student conductor Chaowen Ting, will also present a new work, Three Pieces for Orchestra, by Eastman student composer Thomas Dougherty at the Feb. 4 concert.  The concert is free and open to the public.