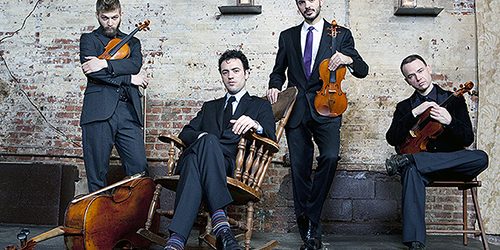 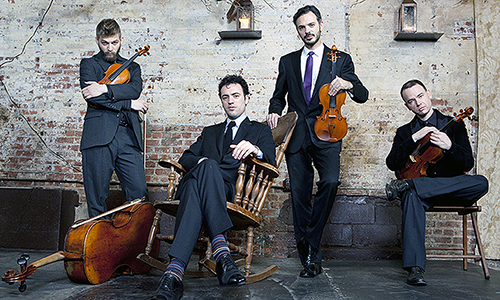 Composed of four classically trained musicians – violinists Johnny Gandelsman and Colin Jacobsen, violist Nicholas Cords, and cellist Eric Jacobsen – Brooklyn Rider is equally devoted to the interpretation of existing quartet literature and to the creation of new works. They have performed everywhere from Joe’s Pub and Alice Tully Hall in New York City and the Todai-Ji Temple in Japan to the American Academy in Rome, and at events ranging from the Malmö Festival in Sweden to the U.S. Open Tennis Championship. They have collaborated with numerous artists, including Chinese pipa virtuoso Wu Man, Irish fiddle player Martin Hayes, songwriter Suzanne Vega, and Kayhan Kalhor, a master of the stringed Iranian kamancheh.

Indicative of their desire to extend the borders of conventional string quartet programming is their longstanding participation as individual members in Yo-Yo Ma’s Silk Road Ensemble, with whom they’ve done numerous museum and university residencies in New York City, Chicago, Zurich, Boston, and Japan.

A favorite on NPR, which credits the group with “recreating the 300-year-old form of the string quartet as a vital and creative 21st-century ensemble,” Brooklyn Rider has been featured on several of the public radio network’s programs, including All Songs Considered, All Things Considered, Tiny Desk Concerts, and All Songs Considered. Their recordings can be heard across North America on classical, world, jazz, pop, and new music stations.

The quartet’s name is inspired in part by the cross-disciplinary vision of Der Blau Reiter (The Blue Rider), a pre-World War I Munich-based artistic collective whose members included Vassily Kandinsky, Arnold Schoenberg, and Alexander Scriabin.

Tickets to the Kilbourn Concert Series performance by Brooklyn Rider are $10 to $20 and are available at the Eastman Theatre Box Office, 433 East Main St., by phone, 585-454-2100, or online at www.esm.rochester.edu/concerts/tickets .