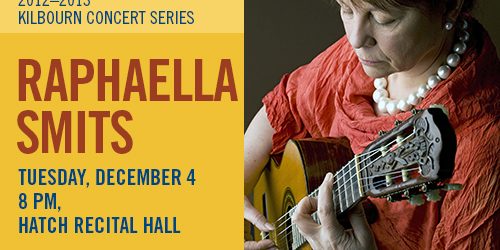 Recognized as “an uncommonly musical guitarist” (Tim Page, New York Times), Smits plays worldwide on eight-string guitars and historical instruments. She studied classical music at the Royal Conservatories of Antwerp and Brussels and with José Tomàs at the “Catedra Andrès Segovia” in Spain. At that time she became an advocate of the eight-string guitar and gave her first recitals. Celebrated for her unique performance style, Smits has been called “une Grande Musicienne” and “one of the most delicate and most cultivated performers of our time” (Jean Bernard, Diapason).

In 1986, Smits was the first woman to win the first prize of the “XX Certamen Internacional de Guitarra Francisco Tarrega”, the famous international guitar competition in Benicasim, Spain. Following this success, she has won prizes in the Granada and Palma de Mallorca contests.

For this Kilbourn Concert Series performance, Smits will be performing works by Bach, Mertz, and Sor. Her program will include J.S. Bach’s “Ciaconna “from Partita No. 2, originally written for the violin.

Tickets to the Kilbourn Concert featuring Raphaella Smits are $10 to $20, discount with UR or student ID. They are available at the Eastman Theatre Box Office, 433 East Main St.; by phone at 585-454-2100, or online at https://www.esm.rochester.edu/concerts/tickets.php