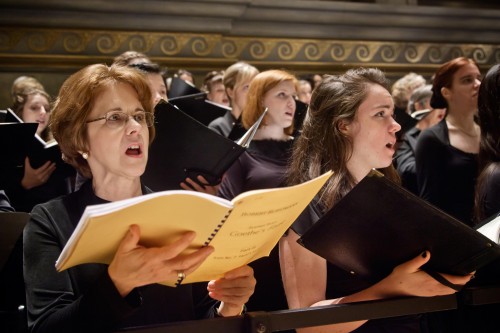 One hundred years after he completed it, Edward Elgar’s Music Makers will finally get its Rochester premiere at Eastman School of Music Friday, Dec. 7, at 8 p.m. in Kodak Hall at Eastman Theatre. Under the direction of William Weinert and Yunn-Shan Ma, the Eastman-Rochester Chorus and the Eastman School Symphony Orchestra will join forces in presenting this work alongside Vaughan Williams’ Dona Nobis Pacem and William Walton’s Spitfire Prelude and Fugue.

One of Elgar’s least-known large-scale works, The Music Makers (1912) was commissioned for the Birmingham Festival, which had also presented the first performances of the composer’s  Dream of Gerontius, The Apostles, and The Kingdom. This setting of Arthur O’Shaughnessy’s Ode (1874) does not share the religious subjects of Elgar’s earlier works, but reflects on music makers – or any artists – as not only the world’s leaders and creative forces, but, as O’Shaughnessy says, “world-losers and world-forsakers, forever and ever.”

Vaughan Williams’ Dona Nobis Pacem is based on a wide collection of texts ranging from the Civil War poetry of Walt Whitman to passages from prophetic books of the Old Testament. Walton’s Spitfire Prelude and Fugue highlights the composer’s own music created for the 1942 wartime film The First of Few, which told the story of the creation of the Spitfire fighter aircraft. This work combines two highlights of the film’s score: the noble title music and the rousing fugue accompanying a scene showing the assembly of aircraft parts in a munitions factory.

The Eastman-Rochester Chorus presents several major choral works each year in collaboration with Eastman orchestras as well as the Rochester Philharmonic Orchestra. The 150-member chorus unites individuals from the Rochester community with students from the Eastman School. The ensemble, which will be presenting Britten’s War Requiem on May 3, 2013, has recently performed Mahler’s Resurrection Symphony, Brahms’ German Requiem, and Stravinsky’s Symphony of Psalms.

This Dec. 7 concert is free and open to the public.