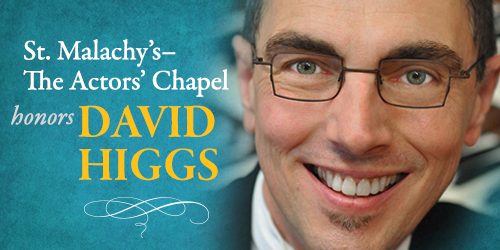 David Higgs, chair of the Organ Department at the Eastman School of Music and one of America’s leading concert organists, has received the Paul Creston Award.  Presented by St. Malachy’s–The Actors’ Chapel, the award recognizes artistic excellence by a significant figure in church music and the performing arts who embodies the Creston Creed and his ideals as a composer, performer, and educator.

Higgs was honored at the Beacon Theatre in New York City on Monday, Nov. 12, during a Voices United Benefit Concert supporting outreach programs of St. Malachy’s-The Actors’ Chapel. He was cited and recognized for being “influential in coaching scores of international competition winners and fine musicians who now hold major positions at cathedrals and universities in America and abroad.”

Creston, a composer who died in 1985, took piano and organ lessons in his youth and pursued studies in theory, literature, and philosophy. His works include symphonies, concertos, dance works, songs, and choral, chamber and instrumental pieces. Creston had a long-time association as organist at St. Malachys’-The Actors Chapel and his personal creed was deeply rooted in the spiritual nature of composition and expression through the arts. The Paul Creston Award is presented to a distinguished artist who embodies excellence in the arts and is a significant figure in church music, media, and the performing arts.

A native of New York City, Higgs has held many prestigious positions in the metropolitan area as well as around the country, starting his career at the age of 10 as a church organist. He was Director of Music and Organist at Park Avenue Christian Church and Associate Organist of the Riverside Church, where he also conducted the Riverside Choral Society. After moving to San Francisco in 1986, he became Director of Music and Organist at St. Mark’s Episcopal Church in Berkeley, Director of Church Music Studies at the Church Divinity School of the Pacific in Berkeley, and Organist/Choir Director at Temple Emanu-El in San Francisco.

Higgs performs extensively throughout the United States and abroad and with numerous ensembles. Since his 1987 debut with the San Francisco Symphony, he has played many Christmas concerts in San Francisco’s Davies Symphony Hall, and in recent years, he has continued this tradition at the Walt Disney Concert Hall in Los Angeles.

In addition to his performing career, Higgs has served on the faculty of the Manhattan School of Music and has been a member of the faculty of the Eastman School since 1992. His students have won prizes in prestigious international competitions and hold important positions in leading academic and religious institutions.