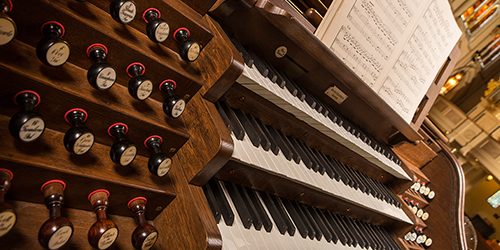 Another magnificent instrument is being added to Rochester’s collection of outstanding organs as the recently restored 1893 Hook and Hastings Organ, installed in Christ Church over the summer and fall, receives its inaugural concert on Friday, Nov. 30.

Made by one of the premier American organ builders of the 19th century, the instrument will be the centerpiece of an event that includes instrumental and vocal performance and dance. The concert, which is free and open to the public, starts at 8 p.m. at the church, located at 141 East Ave.

The organ was acquired by the Eastman School of Music as part of its Eastman Rochester Organ Initiative (EROI) to make Rochester a center for organ research and performance.  It will be used for teaching, practice, and public recitals and concerts by Eastman students and faculty and other guest musicians, and also for the services at Christ Church.

“The 1893 Hook and Hastings Organ provides the community with an organ that is ideal for music from the late 19th century,” said David Higgs, chair of the Organ and Historical Keyboards Department at Eastman.  “Its unique burnished sound gives listeners the opportunity to hear music from the Romantic period performed on a historically appropriate instrument.”

The program will feature the music of Bach, Conte, Saint-Saens and other composers;  improvisation with organ and dancers; and remarks by Douglas Lowry, the Joan and Martin Messinger Dean of the Eastman School of Music, and The Rev. Ruth Ferguson, Rector of Christ Church.

The Eastman School of Music acquired the 1893 Hook and Hastings Organ from St. Dominic’s Catholic Church in Portland, Maine, which had put the instrument into storage when the church closed in 2001. The organ was discovered by Eastman organ curator Mark Austin, and was determined to be a valuable addition to the roster of historic and new organs in Rochester, which includes the Italian Baroque Organ at the Memorial Art Gallery and the Craighead-Saunders Organ in Christ Church. The Hook and Hastings Organ underwent restoration work in Maine last spring and was shipped to Rochester in July for installation in Christ Church. The restored organ is almost identical to and uses some of the original pipes of the organ it’s replacing, which was installed in Christ Church in 1892.  The project was funded by a generous donation from The Kilian J. and Caroline F. Schmitt Foundation.