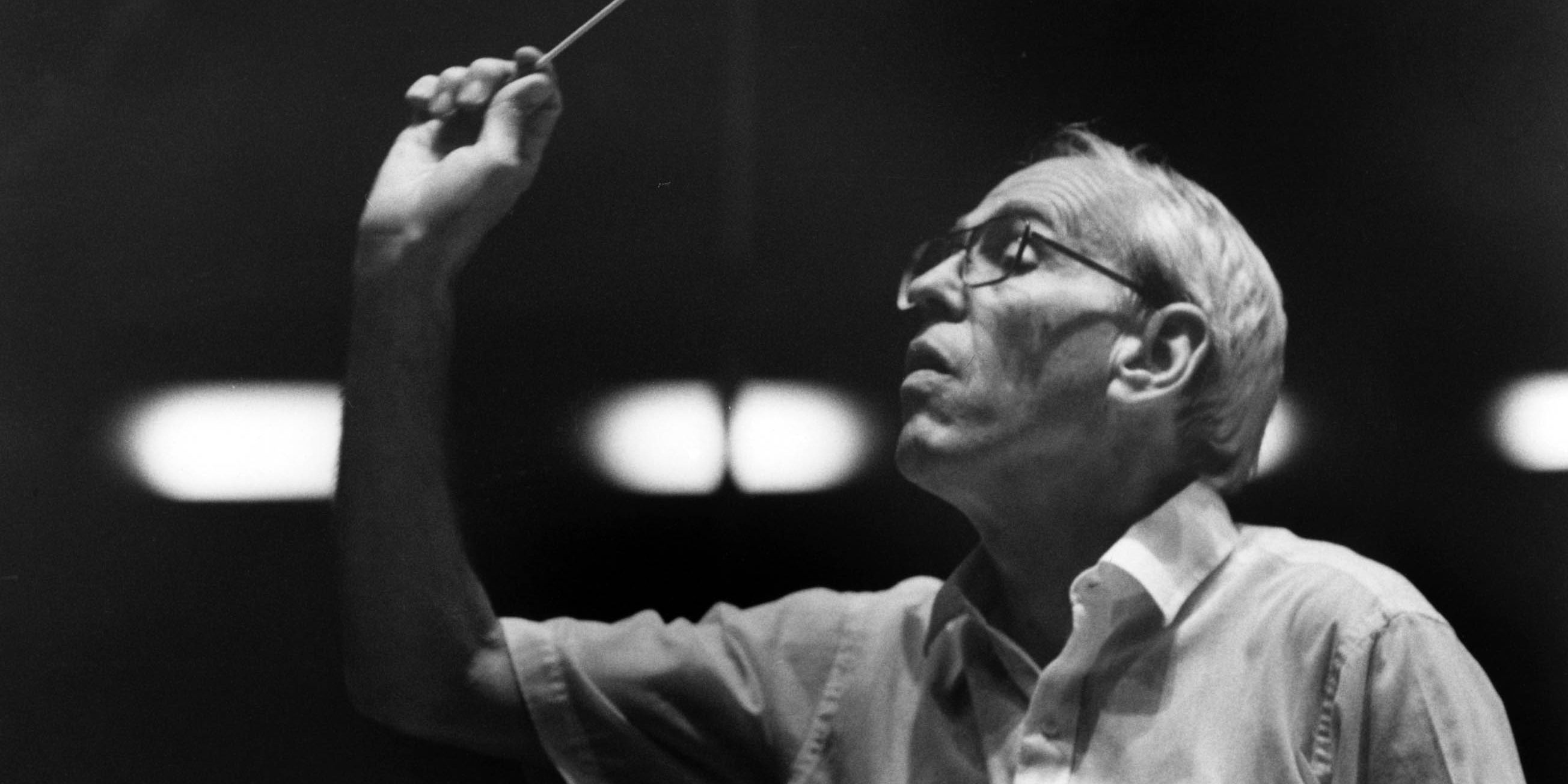 A roster of award-winning composers and musicians will be returning to their alma mater when the Eastman School of Music pays homage to composer, trombonist, conductor, and teacher Rayburn Wright on Friday, Oct. 12.

Wright was a big band musician, an arranger and writer for Radio City Music Hall and for movies and television, a record producer, and a sought-out teacher who guided future Emmy and Grammy winners. He left a rich legacy when he died at age 67 in 1990.

Eastman will celebrate Wright’s life and accomplishments with a concert of music written or arranged by Wright and his former students. Other former students will perform as guest artists with the Eastman Jazz Ensemble and Eastman New Jazz Ensemble. “A Tribute to Ray Wright,” at 8 p.m. in Kodak Hall at Eastman Theatre, is free and open to the public.

The list of those coming includes composer Jeff Beal, an Emmy and DownBeat Award winner and flugelhornist, who will perform with the Eastman Jazz Ensemble under director Bill Dobbins. Other Eastman alumni scheduled to appear with the Ensemble are saxophonists Dave Glasser, Bob Sheppard, and Brian Scanlon; trombonist Bill Reichenbach; pianists Dave Loeb and Grammy Award winner Bill Cunliffe; bassist Bill Grimes; and drummer Rich Thompson, who is also an Eastman jazz faculty member and director of the Eastman Jazz Lab Band. Guitarist Gene Bertoncini, summer jazz instructor at Eastman and visiting soloist and clinician since the early 1970s, will also make a special guest appearance.

As part of the evening’s events, Eastman School will posthumously honor Wright with its Luminary Award, which recognizes extraordinary service to music and the arts at the community and national levels. It will be accepted by Wright’s widow, Doris.

A Life of Many Different Chapters

Wright, who was born on Aug. 27, 1922, in Alma, Mich., received his bachelor’s degree at Eastman in 1943.  He was trombonist and arranger for the U.S. Army Band until 1945; after the war, he served in those roles with both the Tony Pastor and Glenn Miller-Tex Beneke Orchestras.  He took additional coursework at the Juilliard School of Music and received his master’s degree at Columbia University’s Teacher’s College in 1950.

Wright started the summertime Arrangers’ Workshops at Eastman in 1959. It marked the first time a jazz class had ever been officially offered at the School and provided the approach and curriculum for the School’s Jazz Studies and Contemporary Media Department programs.  The program culminated in a popular concert for the public that brought in such big-name performers as Duke Ellington, Dave Brubeck, Marian McPartland, and Mel Tormé.

In 1970, the Eastman School of Music appointed Wright as jazz professor, and he founded and led the department until 1970. He founded the Eastman Studio Orchestra and became director of the Eastman Jazz Ensemble in 1972.  He also developed film scoring studies.  Artists who came to perform with the ensembles during Wright’s tenure included Thad Jones, Wynton Marsalis, Toots Thielemans, and Clark Terry.

“I came to Eastman for the sole reason of studying with Ray Wright and I wouldn’t trade the two years I had with him for anything in the world,” said Rivello, who received his master’s degree in 1989. “In the way that everything about Ray was magical, this tribute weekend will be magical as well!”

Wright composed for Saga of Western Man, a documentary series that ran on television in the 1960s. He received two Emmy nominations for those scores. He also wrote music for the television documentaries The Blue and Red Danube, Kitty Hawk to Paris, Soviet Woman, and others. Besides writing music, Wright authored two books: Inside the Score, about arranging, and On the Track: A Guide to Contemporary Film Scoring, co-written with former student Fred Karlin.

In 1984, Wright won a Grammy Award for his work as producer for the Eastman Philharmonia’s record of Copland’s Lincoln Portrait, with William Warfield as narrator.

During his lifetime, Wright was the recipient of numerous other awards and honors. He received the University of Rochester’s Alumni Citation in 1967 and the Eastman School’s Eisenhart Award for Excellence in Teaching in 1984. In 1986, he was named New York State Professor of the Year by the Council for the Advancement and Support of Education.  In 1989, Eastman created the Rayburn Wright Award to recognize faculty for their contributions to the school.

Following his death, Wright was selected for admission into the 1991 International Association of Jazz Educators Hall of Fame and was also posthumously awarded the Humanitarian Award.

“A Tribute to Ray Wright” is sponsored by Marc and Ann Iacona in honor of Simcona Electronics’ 50th anniversary.

A Tribute to Rayburn Wright.

Sponsored by Marc and Ann Iacona in honor of Simcona Electronics’ 50th anniversary.

You Turned the Tables on Me, (Louis Alter/D. Mitchell, arr. Rayburn Wright)

What Would Be (Steve Bramson)

It Might as Well be Spring (Richard Rodgers and Oscar Hammerstein II, arr. Ellen Rowe)