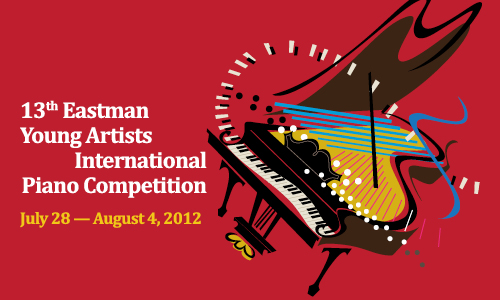 After three rounds of intense competition, five finalists were selected Thursday night, Aug. 2, from the field of 20 musical virtuosos in the 2012 Eastman Young Artists International Piano Competition. They will perform the final round — a movement of a concerto —  with the Rochester Philharmonic Orchestra, under Eastman School of Music conductor Neil Varon, at 7:30 p.m. Saturday, August 4, in Kodak Hall at Eastman Theatre. The top prizes will be announced and awarded afterward, at approximately 10:15 p.m.

Tickets to the final round of the Eastman Young Artists International Piano Competition are $20 (discounts with University of Rochester or student ID.) Tickets are available at the Eastman Theatre Box Office, 433 East Main St., (585) 454-2100, or online www.esm.rochester.edu/concerts/tickets . This event made possible through the generosity of Ms. Deborah Ronnen and Mr. Sherman Levey.

First prize in the Eastman Young Artists International Piano Competition includes a Gold Medal and a cash award of $5,000. The second place winner will receive a Silver Medal and $2,500; third place carries a Bronze Medal and $1,500 award.  Each of the top three winners will also receive a full-tuition scholarship to attend the Eastman School of Music. Additional prizes include $750 awards to competition finalists not winning a medal; and $500 awards for best performances in a master class, of a classical sonata, and of specific works, and an audience prize.

Note to Media: Because of the intensity of the competition finals and pressure on the contestants, we ask media who are interested in covering the finals for understanding and consideration. No flash or camera lights, and entering and exiting will be allowed only between competitors (the works they are performing run between 10 to 20 minutes). Helene Snihur will be on-site as media contact and can also be reached at (585) 274-1057 during business hours or (585) 278-4743 (mobile) after business hours with questions.

Tickets: Tickets $20 (discounts to UR or student ID holders) are available in advance at the Eastman Theatre Box Office, 433 East Main Street, (585) 454-2100, or online: www.esm.rochester.edu/concerts/tickets. This event made possible through the generosity of Ms. Deborah Ronnen and Mr. Sherman Levey.