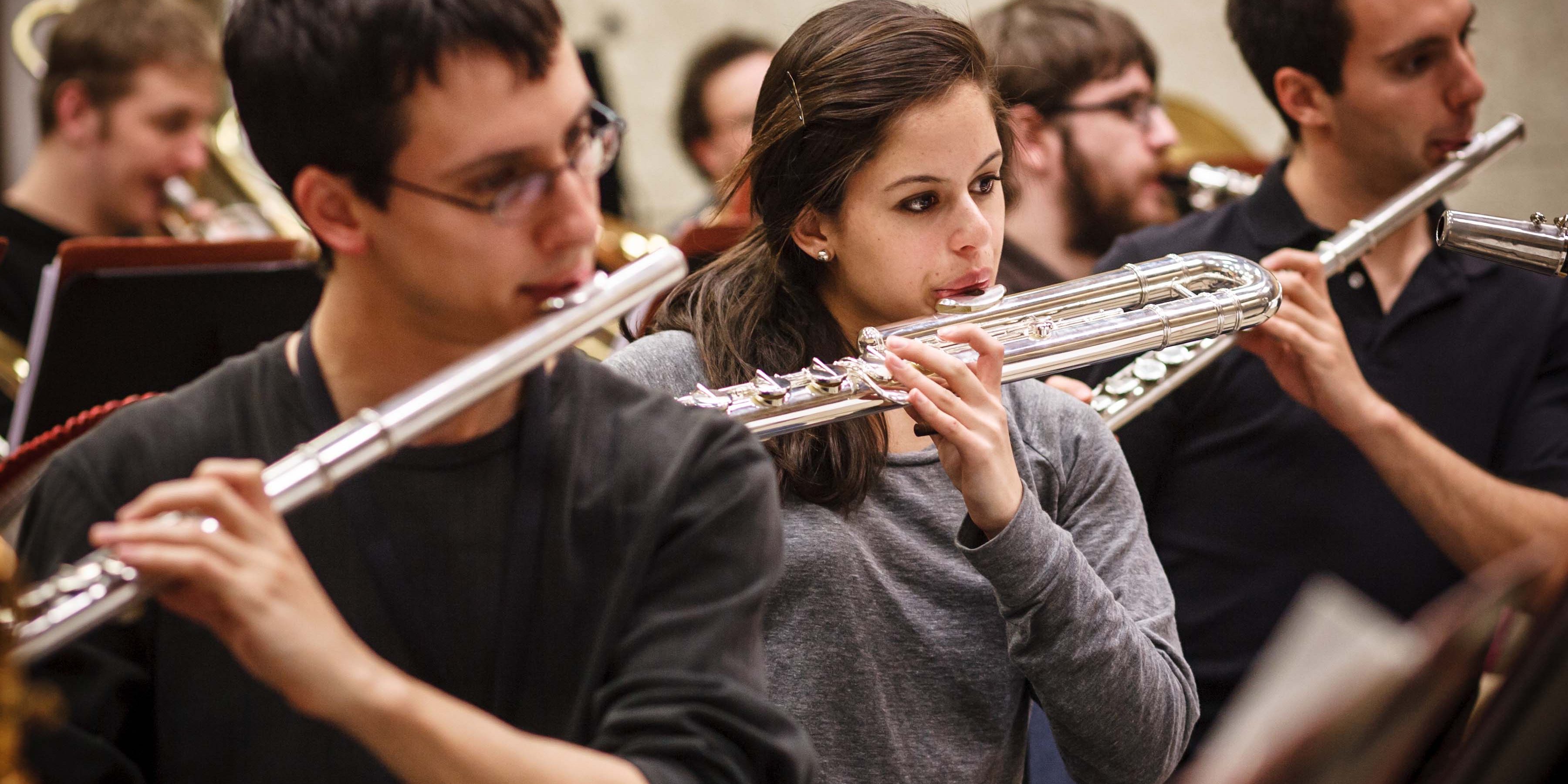 Twenty-six Eastman School of Music students are brushing up on their “ciaos” and “grazies” along with their riffs in preparation for their concerts in Italy next month.

The Eastman Chamber Jazz Orchestra, directed by Dave Rivello, received an invitation to perform at the Umbria Jazz Festival, one of the biggest jazz festivals in Europe. They’ll be presenting six concerts of the music of Gil Evans, much of which has lain dormant since his death and all of it from his original instrumentations, under composer/conductor Ryan Truesdell. This will the first time an Eastman jazz group has traveled abroad since 1982, when the Eastman Jazz Orchestra under Rayburn Wright performed at the Montreux Jazz Festival in Switzerland.

This year marks the centennial of the birth of Evans, an award-winning, self-taught composer, arranger, and bandleader whose career began with his own band in 1933. Evans spent seven years as an arranger for the Claude Thornhill Orchestra in the 1940s and is perhaps best known for his collaborations with Miles Davis on the albums Miles Ahead, Porgy and Bess, Quiet Nights, and Sketches of Spain.

Truesdell received the Evans family’s permission to research the composer’s files and bring to light some of his lesser-known music. He discovered not only original manuscripts that revealed Evans’s original instrumentations and rhythms, he also unearthed more than 50 of Evans’s works that had never been recorded or released. Truesdell’s research resulted in his CD Centennial: Newly Discovered Works of Gil Evans, which was released on May 13, Evans’s birthday.

At the Umbria Jazz Festival, which is held in the medieval city of Perugia and attracts some 200,000 people, the Eastman Chamber Jazz Orchestra will perform programs based on the Davis-Evans albums, arrangements written for the Thornhill orchestra, and the albums New Bottle, Old Wine; Great Jazz Standards; Individualism of Gil Evans; and Out of the Cool.

“Umbria was a very special festival for Gil and his band performed there consecutively for the last few years of his life,” said Truesdell.  “For years, Gil’s music was only available as transcriptions, but all of the music the Eastman musicians will perform at Umbria was taken directly from Gil’s manuscripts, just as they were found in the Evans family archive.  This will be the first time these works will be performed in Europe, exactly as Gil had originally written them. It’s such an honor for us to be able to go there and present Gil’s music in this special time as Gil’s centennial.”

Truesdell, who worked with Eastman alumna Maria Schneider on her two Grammy Award-winning recordings, first led the Eastman Chamber Jazz Orchestra in a concert of Evans’s works in February 2011 in New York City. An Umbria Jazz Festival producer heard them and issued an invitation to play in Perugia this summer.

The Eastman Chamber Jazz Orchestra departs on July 4 and will have a day of rehearsals before playing their first concert on July 7 in the Teatro Morlacchi (Morley Theatre), one of only three ticketed venues for the Umbria Jazz Festival and the largest theater in Perugia. The group’s last performance will be on July 12 around midnight, Evans’s traditional performance time when he appeared at the festival. Joining the group on the concerts are Italian saxophonists Francesco Cafiso and Stefano di Battista, American jazz musician Scott Robinson, and Italian trumpeters Fabrizio Bosso and Paolo Fresu.  The Umbria Jazz Festival runs July 6 through 15, with such headliners as Sonny Rollins, Chick Corea, Esperanza Spalding, Pat Metheny, and Sting, but the Eastman Jazz Orchestra will be returning to the United States on July 13.

“This is an enormous event for the Eastman Jazz Department and an incredible opportunity to show our talent to the world,” said Rivello. “I am thrilled that these musicians will be showcased at such a prestigious European Jazz Festival, playing this amazing music by Gil Evans.”

The Eastman Chamber Jazz Orchestra will be performing a concert of the music of Gil Evans on Friday, June 29, as part of this year’s Xerox Rochester International Jazz Festival.