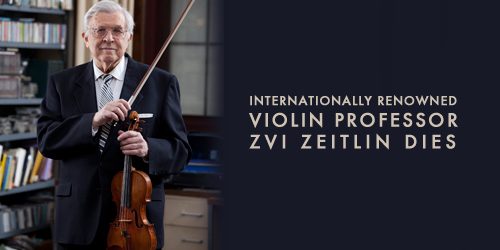 ROCHESTER, N.Y. — Internationally renowned violinist Zvi Zeitlin, who performed with and cemented friendships with some of the greatest artists of the 20th century, and who was a beloved teacher and Distinguished Professor of Violin at the Eastman School of Music of the University of Rochester, died Wednesday, May 2, of complications due to pneumonia.  Professor Zeitlin was 90 years old.

“We were old friends,” said Itzhak Perlman. “Zvi was a wonderful musician, a terrific fiddle player, and was also a very thinking kind of musician.  His thought processes went not just in music, but in other areas. He was an extremely dedicated teacher, which is part of what makes somebody a complete musician.”

In February, Professor Zeitlin gave a full recital on the eve of his 90th birthday (February 21), a feat which few violinists have attempted beyond their seventies. He was joined by fellow faculty member Barry Snyder, his longstanding collaborator, for Schubert’s Duo Sonata in A Major, Op. 162, and Fantasie in C Major, D. 934, Op. post. 159. He also performed the Rondo in A Major for Violin and String Quartet with a quartet of Eastman students. It was his final recital as a full-time faculty member; Professor Zeitlin was going to retire at the end of the academic year after 45 years of teaching at the Eastman School.

“Zvi Zeitlin was one of those rare artists whose honesty and depth were direct reflections of his profoundly authentic humanity,” said Douglas Lowry, the Joan and Martin Messinger Dean at the Eastman School of Music.  “His knowledge, not just of music but life, was a marvel to behold, drawn out of deep roots in values, family, and artistic purpose. He was a legacy at the Eastman School; indeed, the world of music. We mourn his passing, but celebrate the wisdom and poetry that he passes on.”

Considered one of the important violinists of the 20th century, Professor Zeitlin’s career spanned almost eight decades.  At age 11, he became the youngest scholarship student in the history of the Juilliard School.  After receiving a diploma and postgraduate diploma from Juilliard on the eve of World War II, Professor Zeitlin returned to Palestine, began concertizing, and attended the Hebrew University in Judaic Studies. He joined the Royal Air Force in 1943, performing for British, American, and Soviet troops throughout the Middle East.

After the war, Professor Zeitlin returned to Juilliard in the fall of 1947 and continued his studies with Sascha Jacobsen, Louis Persinger, and Ivan Galamian. He gave his professional New York debut recital in 1951. In the ensuing years, he performed with most of the great orchestras of the world under such conductors as Leonard Bern­stein, Zubin Mehta, Christoph von Doh­nanyi, James Levine, Pierre Boulez, Lorin Maazel, Rafael Kubelik, Jascha Horenstein, Antal Dorati, and many others. He frequently toured Europe, Australia, New Zealand, Hong Kong, and Latin America.

Among the world premieres Professor Zeitlin gave were the concerti of Gunther Schuller, Paul Ben Haim, and Carlos Surinach – all of which were commissioned for him, by the Eastman School, Israel Philharmonic, and Music Academy of the West, respectively. His discography includes all of Stravinsky’s violin and piano works, the Schoenberg Concerto, and American composers such as Samuel Adler, Aaron Copland, Jacob Druckman, Lukas Foss, Verne Reynolds, and George Rochberg.

Professor Zeitlin’s pedagogical activities reached across borders as well. He taught hundreds of students, many of whom hold leading positions in orchestras, chamber groups, and universities around the globe. Professor Zeitlin joined the faculty of Eastman in 1967 and was named the School’s first Kilbourn Professor in 1974 and Distinguished Professor of Violin in 1998. In 2004, he received the University of Rochester’s Edward Peck Curtis Award for Excellence in Undergraduate Teaching.

In addition, Professor Zeitlin was on the faculty of the Music Academy of the West since 1973. He held annual master classes in Great Britain at the Royal Academy of Music, Guildhall School of Music and Drama, and Yehudi Menuhin School. He taught in Japan, Korea, China, Israel Germany, Norway, and throughout the United States and Canada.

“Zvi Zeitlin was a living testament to the power and nobility of music and life lived in its service,” said Scott Reed, President of the Music Academy of the West.  “An iconic presence in the great concert halls and teaching studios of the world, Zvi was a man of uncommon vision and generosity of spirit, and we are profoundly grateful for his many lasting contributions to the Music Academy of the West over nearly four decades. An entire generation of accomplished, self-assured violinists will serve as an enduring tribute to his extraordinary gifts as a teacher and mentor.”

Said Jamal Rossi, Executive Associate Dean of the Eastman School of Music, “Distinguished Professor of Violin Zvi Zeitlin has been regarded as one of the major violin artists and pedagogues of the last century. His recording of Arnold Schoenberg’s violin concerto is still considered the definitive recording of this major work.  Zvi is truly the last of an era of great violin pedagogues that included Dorothy Delay at Juilliard and Josef Gingold of Indiana University.  He lived an incredibly rich life, both musically and personally, and he will be deeply missed.”

The walls of Professor Zeitlin’s studio at the Eastman School reflect his career and life. Posters from performances around the world hang alongside pictures and greetings from his students and numerous luminaries of the music world. Photos show Professor Zeitlin with Igor Stravinsky, Serge and Olga Koussevitzky, Pablo Casals, Leonard Bernstein, Gunther Schuller, and other  international artists, and earlier this year, Professor Zeitlin fondly pointed out family snapshots which Itzhak Perlman sent him annually.

Funeral services will be held at 1 p.m. on Friday, May 4, at Temple Beth El in Rochester, N.Y. The University flags across the University of Rochester campus will also be lowered that day in his honor.  Donations in Professor Zeitlin’s memory may be directed to:  Zvi Zeitlin Scholarship Fund at the Eastman School of Music, Office of Advancement, 26 Gibbs St., Rochester, NY 14604; or Zvi Zeitlin Scholarship Fund at the Music Academy of the West, 1070 Fairway Road, Santa Barbara, CA 93108.