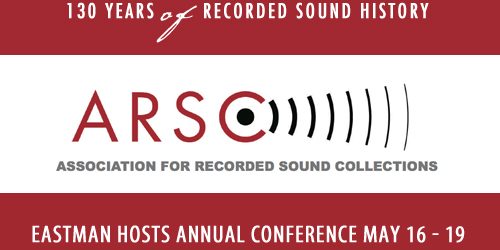 One hundred and thirty years of recorded sound history—from the earliest extant recordings to today’s “born digital” formats—will be explored when collectors, archivists, audio engineers, and recording historians convene for the 46th Annual Conference of the Association for Recorded Sound Collections in Rochester from Wednesday, May 16, through Saturday, May 19. Hosted by the Eastman School of Music, sessions will focus on a full range of musical genres, artists and performances, as well as the timely issues of audio preservation and restoration, public access, and copyright reform.

Sessions on topics of local interest include:

Gerry Szymanski, reserves and digital services librarian in Eastman School’s Sibley Music Library, will explore the early music history of Rochester from the visit of “Swedish Nightingale” Jenny Lind in 1851 through the grand opening of the Eastman Theatre with the film Prisoner of Zenda.

The Flowering of the Phonograph in the Flower City. The phonograph came to Rochester on May 20, 1878, a short time after the formation of the Edison Speaking Phonograph Company. Locally based sound historian and author Tim Fabrizio will trace Rochester’s journey through the early history of recorded sound.

Howard Hanson on Record.  For 40 years, Howard Hanson was the director of the Eastman School of Music, and is remembered as one of America’s great 20th century composers. As a conductor Hanson was deeply involved in sound recording, not only as an interpreter but also in its technical aspects. David Lewis will illustrate Hanson’s major recording achievements.

My Black Mama: The Influence and Significance of Son House Records.  Daniel Beaumont, associate professor in the University of Rochester’s Department of Religion and Classics and author of a book on bluesman Son House, will explore two phases of Son House’s career, from the influence of the blues on the pre-WWII African American community to his “rediscovery” in the 1960s, and the relation of the blues to the youth culture, including rock musicians such as the Rolling Stones, Led Zeppelin, and Jack White.

Phonographs and Music Machines in Silent and Early Sound Films.  Motion pictures and sound recording developed together, with phonographs and records often having dramatic functions in “silent” films, as each technology was capable of doing something the other could not. Philip Carli will illustrate this premise with images from films made in the 1910s to 1920s, showing how sound recording influenced American life, and also the ingenuity filmmakers’ conceptions of what sound recording could and would eventually do. Carli received his master’s and doctoral degrees at the Eastman School, has developed and taught a course on recorded sound, and is known internationally as a silent film accompanist.

An Historical Survey of the Eastman Audio Archive.  In the early 1930s, the Eastman School of Music began to capture its performances on instantaneous disc; today the Eastman Audio Archive (EAA) holds recordings of more than 35,000 performances, including the long-running American Composers Concerts and Festivals of American Music. David Peter Coppen, special collections librarian and archivist in the Sibley Music Library, will provide an overview of the EAA, which offers much research potential to historians of American music.

All events will take place at the Radisson Hotel Rochester Riverside in the downtown Rochester. The conference is open to the general public. The full conference program as well as abstracts for each session and a registration form may be found at: http://www.arsc-audio.org/conference/.

ARSC is a nonprofit organization dedicated to the preservation and study of sound recordings, in all genres of music and speech, from all periods. The annual conference brings together a unique mix of over 200 experts from the United States and abroad.