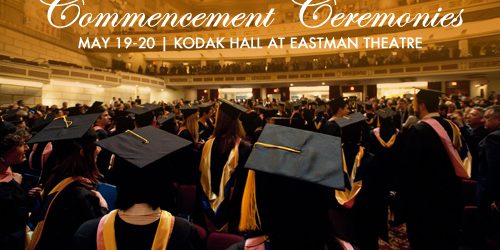 Pulitzer Prize-winning composer George Walker ʼ56 (DMA) will receive the honorary degree Doctor of Music during the Eastman School of Music’s commencement ceremony at 11:15 a.m. Sunday, May 20, in Kodak Hall at Eastman Theatre, for students receiving their bachelor’s and master’s degrees.

This year’s commencement ceremonies at the University of Rochester also feature award presentations to Glenn Watkins ʼ53 (PhD) and to Professor of Music Theory Robert W. Wason, who is also an affiliate faculty in the Department of Jazz Studies and Contemporary Media. Watkins will receive the Rochester Distinguished Scholar Award and Wason will receive the William H. Riker University Award for Excellence in Graduate Teaching during doctoral degree commencement ceremonies at 9:30 a.m. Saturday, May 19, in Kodak Hall.

Approximately 219 candidates will receive bachelor’s, master’s, and doctoral degrees at the Eastman School of Music this term.

Walker has achieved many-faceted success as a musician, composer, and educator, with numerous awards, commissions, and major performances.  His compositions have been performed by virtually every major orchestra in the United States and by many abroad. Walker’s “Lyric for Strings,” written in 1946 when he was just 24, is perhaps the most frequently performed orchestra work by a living American composer. His Second Piano Sonata, written for his doctoral thesis at the Eastman School of Music, is now regarded as a masterpiece. His works have been recorded on several record labels and performed under the baton of such conductors as Lorin Maazel, Zubin Mehta, Ricardo Muti, Robert Shaw, Leonard Slatkin, and others. At almost 90, Walker is still composing: his most recent work, Sinfonia No. 4, was premiered in March this year.

Walker received the 1996 Pulitzer Prize in music for Lilacs for Voice and Orchestra, premiered by the Boston Symphony under conductor Seiji Ozawa. He was awarded Fulbright and Guggenheim Fellowships, and was the first composer to receive the John Hay Whitney Fellowship. Walker is a member of the American Academy of Arts and Letters and has been inducted into the American Classical Music Hall of Fame.

Walker’s career as a teacher has included faculty appointments at Dillard University, the Dalcroze School of Music, The New School, Smith College, the Peabody Institute, the University of Delaware, a Visiting Professorship at the University of Colorado, and Rutgers University, where he retired as chair of the Music Department in 1992.

Wason is a noted musician, scholar, and composer across genres. He played jazz piano with Sammy Davis Jr., Bobby Vinton, and the Four Tops, while his work on Viennese harmonic theory in the late 19th century is still a primary source for research in that area. His compositions include vocal, solo instrumental, and chamber works. He has written journal articles on the history of music theory, 20th-century music, and jazz, on subjects ranging from 12-tone music to the songs of Alec Wilder. Wason was a University Bridging Fellow in the Department of Modern Languages and Cultures.

Since his dual appointment to the Eastman faculty in 1983, Watson has advised students who now hold positions at institutions in Canada, the Netherlands, Brazil, and the United States.  Besides teaching core doctoral courses in theory, keyboard skills, advanced harmony and composition, he advised on the design of the jazz DMA program, and developed diverse seminars on the music of Bill Evans, Bela Bartok, J.S. Bach, Frederic Chopin, and Anton Webern. Wason has been awarded Guggenheim and NEH Fellowships, Paul Sacher Foundation and German Academic Exchange grants, and two ASCAP (American Society of Composers and Publishers) Deems Taylor writing awards.

One of the most distinguished musicologists of our time, Watkins is the Earl V. Moore Professor Emeritus of Music History and Musicology at the University of Michigan. His scholarly impact ranges from his pioneering studies of Renaissance composer Carlo Gesualdo to his influential books on musical modernism and its postmodern consequences and music in World War I.

Watkins has published an overview of 20th century music in Soundings; examined the concept of collage in musical Modernism and in the rise of Postmodernism in Pyramids at the Louvre; and looked at how music reflected concerns of German hegemony in Proof Through the Night: Music and the Great War. Critics praise his books for paving new avenues for understanding music and its relation to other arts of the last hundred years. Watkins has presented at numerous conferences in both late Renaissance and 20th-century studies, collaborated with performance groups, and worked on projects for such recording labels as Columbia, Nonesuch, Edition de L’Oiseau-Lyre, Harmonia Mundi, and Deutsche Grammophone and for BBC, German, and Italian television. He is an Honorary Member of the American Musicological Society.

More information about Eastman’s commencement ceremonies can be found at https://www.esm.rochester.edu/registrar/commencement/ .