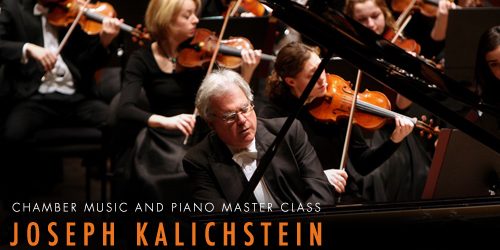 Renowned pianist Joseph Kalichstein, who’s won acclaim throughout the United States and Europe as an orchestral soloist, recitalist, and chamber musician, will hold a master class at the Eastman School of Music from noon to 2 p.m. on Friday, April 20, in Hatch Recital Hall. The event is free and open to the public.

Kalichstein holds the Edwin S. and Nancy A. Marks Endowed Chair in Music Studies at The Juilliard School, where he’s been on the faculty since 1983. He is a founding member of the Kalichstein-Laredo-Robinson Trio, which made its debut at the White House for President Carter’s Inauguration in 1977.  The trio has produced many award-winning recordings, commissioned new works that add to the piano trio literature, and performed in many of the world’s major concert halls. Kalichstein is also a frequent guest pianist with such string quartets as the Guarneri and the Emerson.

Kalichstein has appeared in several recitals on Carnegie Hall’s “Keyboard Virtuosi” series and performed with such orchestras as the Berlin, Israel, Los Angeles, and New York Philharmonics; Tokyo’s NHK; the Symphony orchestras of London, Boston, Chicago, St. Louis, and Detroit; the English, Scottish, and Saint Paul Chamber Orchestras; and other ensembles. He also serves as Artistic Advisor for Chamber Music and Artistic Director of the Fortas Chamber Music Concerts at the Kennedy Center for the Performing Arts.

Born in Tel Aviv in 1946, Kalichstein came to the United States in 1962. He won the Young Concert Artists’ Award in 1967 and the next year appeared on national television with the New York Philharmonic under Leonard Bernstein. He was awarded first prize in the 1969 Leventritt Competition by a unanimous decision of the jury.

Participants in the master class include two piano soloists, a piano trio, and a piano quartet, all Eastman School of Music students.

Kalichstein’s visit is sponsored by the Chamber Music and Piano Departments at Eastman.