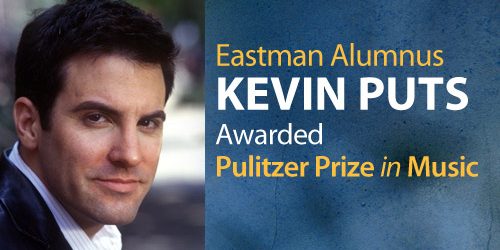 Composer Kevin Puts, who received his bachelor’s and doctoral degrees at the Eastman School of Music, has won the 2012 Pulitzer Prize in Music for Silent Night: Opera in Two Acts.

The work, which was commissioned and premiered by the Minnesota Opera on Nov. 12, 2011, was described by the Pulitzer committee as “a stirring opera that recounts the true story of a spontaneous cease-fire among Scottish, French and Germans during World War I, displaying versatility of style and cutting straight to the heart.”

The New York Times has described Puts’s music as “exhilarating and compelling.” He has been critically acclaimed for his rich and distinctive voice and called one of the most important composers of his generation. His works have been commissioned and performed by leading orchestras in the United States and abroad, including the New York Philharmonic, the Boston Pops, and the Tonhalle Orchestër of Zurich, and by leading chamber ensembles such as eighth blackbird, the Mirò Quartet, Eroica Trio, and the Chamber Music Society of Lincoln Center.

Puts received his Bachelor of Music and his Doctor of Musical Arts degrees at Eastman in 1994 and 1999, respectively, and holds a master’s degree from Yale University.

Puts is on the composition faculty of the Peabody Institute of the Johns Hopkins University and previously taught at the University of Texas at Austin.