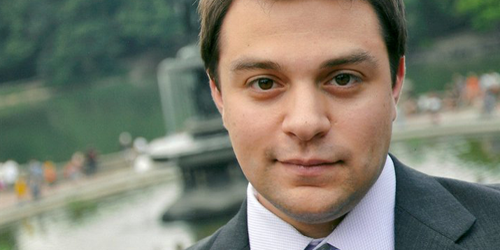 Eastman School of Music student Matthew Grills was one of five winners of the Metropolitan Opera’s National Council Auditions after the Grand Finals Concert held this afternoon (Sunday, March 18) in New York City. He and  the other four winners, who were chosen from nine finalists, each received a cash prize of $15,000.

A second year master’s degree student, Grills performed two arias:  “Ah! Mes Amis!”  from Donizetti’s opera La Fille du Regiment, an aria which, with nine high Cs, has been called “the Mount Everest for tenors;” and  “Tradito! Schernito” from Mozart’s opera Cosi fan Tutte. The Grand Finals Concert took place on the stage of the Met and singers were accompanied by the Metropolitan Opera Orchestra.

Nearly 1,500 singers entered this year’s Metropolitan Opera National Council Auditions, which are considered the most prestigious in North America for singers seeking to launch an operatic career. Past winners of the competition include Eastman graduate Renée Fleming, Susan Graham, Thomas Hampson, Ben Heppner, Frederica von Stade, and Jessye Norman, among others. In addition, other Eastman singers who have progressed to the semi-final or final rounds of the competition include Professor of Voice Katherine Ciesinski, who won second place in 1974, and Assistant Professor of Voice Jan Opalach, a winner in 1979, respectively and Associate Professor of Voice Kathryn Cowdrick and Eastman graduates Nicole Cabell and Anna Marie Zmolek, who were semi-finalists in 1984, 2005, and this year, respectively.

Grills, 25,  was the winner of the Eastman School of Music’s 2011 Jessie Kneisel Lieder Competition and received third place in the 2011 Friends of Eastman Opera Voice Competition. He will also be in the finals of the Lotte Lenya Competition sponsored by the Kurt Weill Foundation for Music; the finals of that competition will be held at Eastman on  Saturday, April 21. Grills is a student of Associate Professor of Voice Robert Swensen.

After graduating from the Eastman School of Music this May, Grills will spend the summer in the Santa Fe Opera Apprentice Program and begins a year-long long residency with the Portland Opera in the fall.