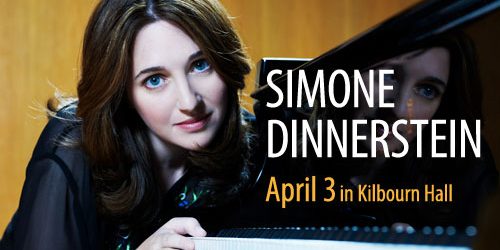 American pianist Simone Dinnerstein, whose self-produced recording of Johann Sebastian Bach’s Goldberg Variations received critical acclaim and made a number of “Best of 2007” lists including those of The New York Times and New Yorker, will perform in the Kilbourn Concert Series at 8 p.m. Tuesday, April 3, at the Eastman School of Music.

The New York-based artist has been called “a throwback to such high priestesses of music as Wanda Landowska and Myra Hess” by Slate magazine, and praised by TIME for her “arresting freshness and subtlety.”

In January of this year, Sony released Dinnerstein’s latest album, Something Almost Being Said: Music of Bach and Schubert. In its first week on sale in the United States, the recording made Billboard’s Top Current albums in all genres and reached No. 2 on the Billboard Classical.

Dinnerstein’s performance schedule has taken her around the world since her triumphant New York recital debut at Carnegie Hall’s Weill Recital Hall in 2005. Recent and upcoming performances include her recital debuts at The Kennedy Center for the Performing Arts, the Vienna Konzerthaus, and London’s Wigmore Hall, the Lincoln Center Mostly Mozart Festival, the Aspen and Ravinia festivals, and at the Stuttgart Bach Festival; as well as debut performances with the Frankfurt Radio Symphony Orchestra, Czech Philharmonic, New York Philharmonic, Minnesota Orchestra, Atlanta Symphony, Baltimore Symphony, Orchestra of St. Luke’s, and the Tokyo Symphony.

Dinnerstein’s Kilbourn program includes a Chopin Nocturne, a Brahms Intermezzo, Schubert’s op. 90 Impromptus, Bach Partitas no.1 and no. 2, and “The Cohen Variations,” a recent work by New York composer Dan Felsenfeld based on a Leonard Cohen song.