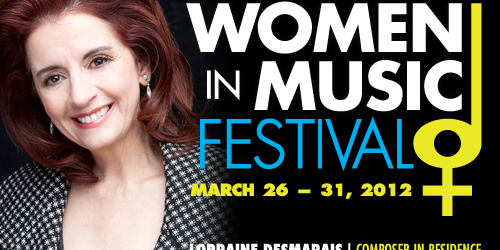 Canadian pianist and composer Lorraine Desmarais, a versatile jazz musician who’s also performed with classical artists, headlines this year’s Women in Music Festival at the Eastman School of Music March 26 to 31.  As composer-in-residence, she will hold workshop and coaching sessions, attend recitals of her works, and rehearse and perform with the Eastman New Jazz Ensemble.

The roster of Festival performers features the early music ensemble Publick Musick; the horn and tuba duo TubaCOR; Music After 1900, an ensemble that designs each performance around a musical style and composer;  Eastman School faculty artists, students, and alumni; other area musicians; and local women poets, who will present readings of their own work. Events will be presented at several area venues, including the Eastman School, Nazareth College of Rochester, Hochstein School of Music and Dance, Church of the Blessed Sacrament, and First Universalist Church. All events are free and open to the public.

First held in 2005, Eastman’s Women in Music Festival is a celebration of women involved in all aspects of music, including composition, performance, teaching, scholarship, and administration.  “Our goal is to create a positive and inspiring event that focuses on the accomplishments of women in the entire field of music,” said festival founder and director Sylvie Beaudette, assistant professor of chamber music and accompanying. “Each year is different because of what the various artists bring to the festival; the wide range of musical styles ensures that there’s something for everyone!”

Desmarais, who’s been called a “power-packed dynamo” by Jazz Times magazine, has appeared in jazz festivals and with symphony orchestras in North America, Africa, Asia, and Europe. Since winning First Prize at the Montréal International Jazz Festival in 1984, she has appeared with such jazz artists as Chick Corea, Marian McPartland, and Oliver Jones; Cuban musician and composer Paquito D’Rivera; classical violinist Angèle Dubeau; and artists in the popular music scene of Québec such as singer-songwriters Ariane Moffat and Jim Corcoran and rock singer Martin Deschamps. Other honors include First Prize at the Great Jazz Piano American Competition, the Oscar Peterson Award of the Montréal International Jazz Festival, the Artistic Creation Award of the Conseil des Arts et des Lettres du Québec, and the Ontario Arts Foundation Prize for Keyboard Artistry. Desmarais has recorded 10 CDs, two of which received Felix Awards from the ADISQ (the “Grammys” of  Québec).

In addition to her rehearsing and coaching activities at the Eastman School, Desmarais will participate in a round table discussion with composers Lisa Bielawa, Laura Karpman, and Hilary Tann at 3:30 p.m. on Friday, March 30, in Howard Hanson Hall, and will appear in concert with the New Jazz Ensemble, under director Dave Rivello, at 8 p.m. Saturday, March 31, in Kilbourn Hall.

A complete schedule can be found online at https://www.esm.rochester.edu/wmf/