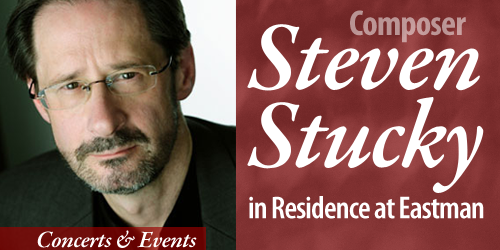 Free concerts featuring works by Steven Stucky will highlight the Pulitzer Prize-winning composer’s residency at the Eastman School of Music Dec. 5 through Dec. 9.

A full evening will be devoted to the “Chamber Music of Steven Stucky,” beginning at 8 p.m. on Thursday, Dec. 8, in Hatch Recital Hall. On Friday, Dec. 9, the Eastman Wind Ensemble will perform Stucky’s Concerto for Percussion and Wind Orchestra during the Ensemble’s 8 p.m. concert with the Eastman Wind Orchestra in Kodak Hall. In addition, the public can attend Stucky’s lectures and master class and an interactive performance of his work Boston Fancies.

Stucky has an extensive catalogue of compositions ranging from large-scale orchestral works to a cappella miniatures for chorus. He is also active as a conductor, writer, lecturer and teacher. For more than two decades he has enjoyed a close partnership with the Los Angeles Philharmonic: in 1988 André Previn appointed him composer-in-residence of the Los Angeles Philharmonic, and later he became the orchestra’s consulting composer for new music. Commissioned by the orchestra, his Second Concerto for Orchestra brought him the Pulitzer Prize in music in 2005. Stucky has taught at Cornell University since 1980 and now serves as Given Foundation Professor of Composition.

The all-Stucky program on Dec. 8 features guest artists the Los Angeles Piano Quartet. The group has been a popular guest on Minnesota Public Radio’s St. Paul Sunday, has been featured at the Bermuda and Tucson Festival and the Eugene and Carmel Bach Festivals, has conducted several tours of Europe, and has commissioned works for piano quartet from such composers as Stephen Hartke, Gerard Schurmann, and Stucky. The LAPQ will perform Stucky’s Piano Quartet, which the ensemble premiered at the 2005 Tucson Festival. Members of the ensemble are Steven Doane, cello, who is professor of cello at the Eastman School of Music; Katherine Murdock, viola; Xak Bjerken, piano; and Michi Wiancko, violin

The Dec. 9 Eastman Wind Ensemble performance of Stucky’s Concerto for Percussion and Wind Orchestra will feature Michael Burritt, professor of percussion at Eastman.

During his residency, Stucky will also attend rehearsals, coach performers, and meet with composition students. His schedule of public activities features: