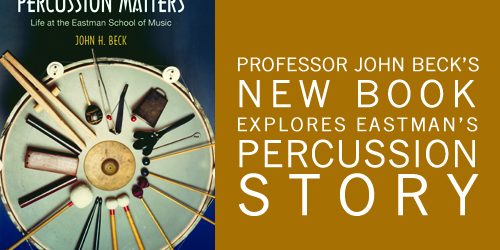 John Beck came to the Eastman School of Music as a student in 1951, the only percussionist in his class. Except for four years with The President’s Own Marine Corps Band, Beck has made Eastman his home for six decades.

“It’s a book that was in the making for 49 years,” said Beck. As he settled into teaching at Eastman in the mid-1960s, Beck recalled, he wanted to document the history of percussion at the School. “It’s important that this history not be lost, that students understand the past as a foundation for the future,” he felt, and retirement in 2008 allowed him more time to pursue that vision.

Percussion Matters touches briefly on Beck’s childhood and teenage years in Pennsylvania, when he studied percussion with various teachers and played in social clubs, fraternity houses, and bars. He writes about all the percussion teachers at Eastman – George Waterhouse, William G. Street, and currently Michael Burritt – mentions performance opportunities around Rochester, and describes practice spaces available to percussion students as well as student life at the School during different decades.

After graduating from Eastman in 1955, Beck joined The President’s Own Marine Corps Band for four years.  He replaced fellow Eastman alumnus Oliver Zinsmeister, who in 1935 became the School’s first graduating percussion major. Returning to Rochester, Beck embarked on a 40-year career, first as principal percussionist and then as timpanist, with the Rochester Philharmonic Orchestra; earned his master’s degree at Eastman; and began teaching at the School in 1959. He continues to teach a class in the History of Percussion.

Beck has included photos of Eastman faculty and student percussionists, personal photos, concert programs, and even inventory sheets as he traces the School’s percussion history. An appendix lists the names of all percussion graduates from 1935 through 2008.

The foreword to the book was written by Steve Gadd (BM ’68), a respected, influential, and in-demand drummer who has performed with Chick Corea, Paul Simon, the Manhattan Jazz Quintet, Paul McCartney, Eric Clapton, Manhattan Transfer, and many others. Gadd notes that Beck “guided me through high school, helped me get accepted to Manhattan School of Music, and later helped me transfer to Eastman.”

Beck taught more than 250 students at Eastman, and he reached out to many of them for comments and reminiscences. The remarks range from observations about his teaching – “I remember you gave us a solid foundation upon which to build but also allowed us the freedom to develop our own direction” – to humorous memories about student nicknames and instruments not being returned to their place, to general observations about students’ camaraderie and the variety of School and community experiences available to the students.

“As the Timpanist of the Rochester Philharmonic Orchestra and the Professor of Percussion at the Eastman School of Music over four decades, John H. Beck has become one of the most influential teachers of percussion in the world,” said Bill Cahn. A former student of Beck’s, Cahn was principal percussionist of the Rochester Philharmonic, is a member of the percussion group NEXUS, and teaches at Eastman. “No one anywhere has a better understanding of the percussionist’s inner world. The exceptionally high number of his students who have filled positions in symphony orchestras, as well as in jazz and popular music ensembles of all varieties, attests to the impact of his teaching on the art of percussion performance.”

When asked why percussion matters, Beck noted, “It’s the only instrument that I can think of that can perform in any music style – classical, jazz, rock, and more. Every country has a specific drum identified with it, like the tabla in India or the darbuka  in Turkey or the tamborim in Brazil. Percussion matters to all who have come to Eastman and are pursuing the art of percussion, who’ve made it their livelihood. It matters to every country in the world and to all who play it.”