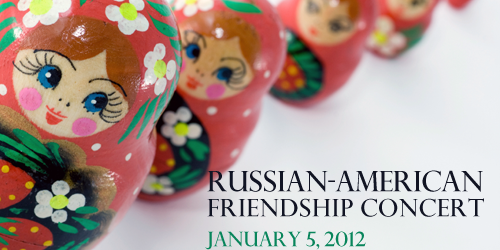 A diverse program of music by Russian composers, presented by the Eastman Community Music School and Linkages of Rochester, Inc., will celebrate Rochester’s connection to its sister city of Velikiy Novgorod. The sixth annual collaborative event, titled “A Russian-American Friendship Concert,” will be held at 7:30 p.m. Thursday, Jan. 5, 2012, in Kilbourn Hall.

Featuring faculty and students of the Eastman Community Music School, the concert will include songs by Rachmaninoff; piano works by Prokofiev, Kabalevsky, and Maikapar; and music for strings by Schnittke and Prokofiev. Performers include singers Cecile Saine, John Chiazza, and Joe Finetti; pianists Howard Spindler, Irina Lupines, and Douglas Hanson, along with several piano students; and violinist Anyango Yarbo-Davenport.

Concert patrons will also be treated to a presentation of photographs of the city of Novgorod taken by Russian photographers. In addition, artist Rand Darrow will exhibit some of his art works inspired by Russian folk tales and mythology.

The hour-long concert will be followed by a reception of Russian treats and sweets in Cominsky Promenade, located on the second floor of the Eastman School of Music.