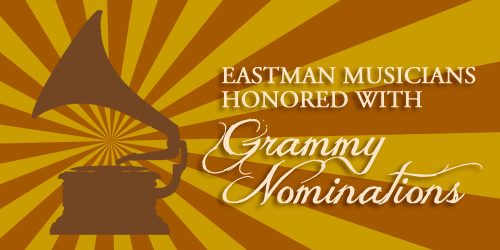 Carter is up for Best Improvised Jazz Solo for “You Are My Sunshine,” a track on the album This is Jazz. The category is intended to recognize improvised jazz solos of substantive content, as opposed to embellishments or fills or written-out solos. Carter has previously won two Grammys.

Fleming, a three-time Grammy winner, performs the role of Violetta on the recording of the Royal Opera House’s production of Verdi: La Traviata, which is up for Best Opera Recording; the award in this category goes to the conductor, album producers, and principal soloists. The nomination marks Fleming’s 13th Grammy nomination.

Hollenbeck was nominated for a Best Instrumental Composition Grammy for “Falling Men” from the album Shut Up and Dance. Previously, the John Hollenbeck Large Ensemble has earned two Grammy nominations for Best Large Jazz Ensemble Album.

Lamb is up for Best Classical Instrumental Solo for his work in Joseph Schwantner’s Concerto for Percussion and Orchestra on Schwantner: Chasing Light, recorded with the Nashville Symphony. Lamb is Principal Percussionist of the New York Philharmonic.

The 12-member ALIAS Chamber Ensemble, formed in Nashville in 2002, was nominated for Best Small Ensemble performance for Hilos, an album composed by Gabriela Lena Frank and performed by members of ALIAS and Frank. It’s the group’s first Grammy nomination.

The 54th annual Grammy Awards will be presented on Feb. 12, 2012.  The complete list of nominees can be found at http://www.grammy.com/nominees .