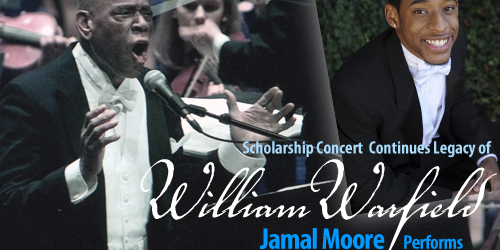 Since it was founded in 1977, the William Warfield Scholarship Fund has provided financial aid to more than 35 voice students at the Eastman School of Music, and spotlighted talented recipients during an annual benefit concert. This year’s scholarship holder, bass-baritone Jamal Moore, will be joined by fellow members of the University of Rochester YellowJackets for the annual concert at 4 p.m. Sunday, Jan. 15, 2012, in Kilbourn Hall.

Moore will present a varied program, ranging from opera arias to a cappella. He and the YellowJackets competed on the fall season’s national broadcast of The Sing-Off and performed two sold-out concerts in Kodak Hall at Eastman Theatre this month.

“I am so grateful for the opportunity that I had to represent this scholarship for the past three years,” said Moore. “It has been a phenomenal journey, it made me wake up each day eager for more knowledge, and it also made me strive to be a positive role model for younger generations, just like William Warfield.”

A senior at Eastman, Moore is a native of Augusta, Ga., where he sang with various ensembles and churches. In 2008, Moore held the title of State Champion for Boy’s Solo Region 3-AAA. At Eastman, he studies with Professor Jan Opalach and received the freshman and sophomore jury award.  He was invited to sing in the 2009 Gateways Music Festival and he has performed at Rochester area churches, including the Episcopal Church of St. Luke and St. Simon Cyrene, where he is a choral scholar. With Eastman Opera Theatre, he has performed the roles of Buff in Mozart’s Der Schauspieldirektor (The Impresario), and the Orderly in Hindemith’s Hin und zurück. In February 2012, he will appear in Eastman Opera Theatre’s production of Il Matrimonio Segreto. After graduation, he plans on pursuing performance opportunities.

Past recipients of the William Warfield Scholarship have included Derrick Smith, who has performed in operatic roles and as a concert soloist in the United States, Brazil, and Europe; and soprano Nicole Cabell, who in 2005 won the BBC Cardiff Singer of the World competition, one of the music world’s highest-profile competitions, and is a soloist with the Metropolitan Opera.