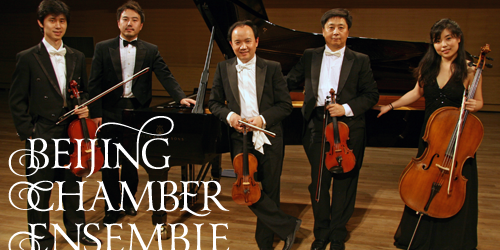 As part of a two-year-old cultural exchange and collaboration between the Eastman School of Music and conservatories in China, the Beijing Chamber Ensemble will present a free recital at 8 p.m. Monday, Oct. 17, in the School’s Hatch Recital Hall.

The Beijing Chamber Ensemble is composed of five faculty members from the School of Arts of Renmin University. The group is led by Ge-Fan Yang, former first violinist of the Alexander String Quartet, and includes pianist Fang Zhang, who received his masters at the Eastman School and pursued further studies here as a Liberace Scholar.

Members of the Beijing Chamber Ensemble also include violinist Xiaowei Chen, former associate concert master of the Tucson Symphony Orchestra; violinist Yue Qi, who has performed widely in the United States, Canada, Austria, Germany, and Spain; and cellist Ying Wang, a member of the National Centre for Performing Arts Orchestra.

During the 2010-2011 concert season, the Beijing Chamber Ensemble performed at some of the most prestigious venues in China, including the National Centre for the Performing Arts and Beijing Concert Hall, and embarked on a tour of all major music schools in China and Taiwan.

The “Eastman-China Connection” initiative was created in 2009 to provide opportunities for musicians to engage in cross-cultural dialogue and foster strong ties and relationships across borders. That year, four Eastman graduate students, three faculty members, and Eastman School of Music Dean Douglas Lowry conducted a 12-day tour of four Chinese conservatories. This past April, faculty members from the China Conservatory in Beijing visited the Eastman School of Music and performed a free public concert.

Renmin University is located in the capital city of Beijing and is one of the most prestigious universities in China. Its School of Arts was founded in 1999.