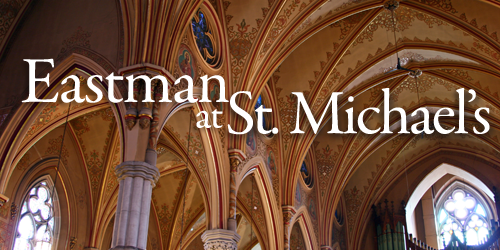 The first fall concert will feature Voices, Rochester’s professional choral chamber ensemble, conducted by founder William Weinert, professor of conducting and ensembles at the Eastman School. Voices specializes in music for small and flexible vocal ensembles and performs a repertoire of music from the Renaissance through the 21st century.  City newspaper has described the ensemble’s sound as “a sonic cloudburst,” and has noted that “Voices marks a new era of choral vitality in Rochester.”

The recital at St. Michael’s starts at 2:30 p.m. and will feature Bach’s two great double chorus motets, Singet dem Herrn and Der Geist hilft, as well as Schütz’s masterful setting of Psalm 116, and the Brahms setting of  Schaffe in mir, Gott.

“Eastman at St. Michael’s” concerts are held on the fourth Sunday of the month at 2:30 p.m. Each concert is followed by a reception and the 4 p.m. Mass, which includes special music by the concert performers.

Concerts are free and open to the public. Donations can be directed to the church.

The recital series, launched in January 2009, is a collaboration between the Eastman School and St. Michael’s Roman Catholic Church. Located at 869 North Clinton Ave. in Rochester, St. Michael’s is an 1888 Gothic Revival church that was designed by prominent Chicago architect Adolphus Druiding. The Lockport sandstone exterior features a 225-foot tower, a prominent visual landmark on the city’s northeast side. The interior, which is highlighted by stenciled walls, carvings of oak and gold leaf, and Austrian stained glass windows, is considered one of the most beautiful in the area.