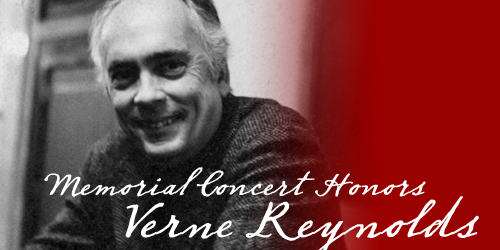 A group of Eastman School of Music faculty, former faculty, and graduates will gather to present a musical tribute to the late noted hornist and teacher Verne Reynolds. Scheduled for 3 p.m. Sunday, Sept. 18, in the School’s Kilbourn Hall, the memorial concert is free and open to the public and will feature performances by notable soloists and Eastman ensembles.

Professor Reynolds, who died this past June at age 84, taught horn at the Eastman School of Music for 36 years and was elected an Honorary Member of the International Horn Society in 1994, a distinction reserved for the most legendary figures in the profession.  His career included performances with several orchestras and ensembles, including the Cincinnati Symphony and Rochester Philharmonic Orchestra (RPO); teaching positions at several top music schools, including Cincinnati Conservatory, Indiana University, and the Eastman School of Music; and publishing more than 60 musical works. As a founding member of Eastman Brass, an ensemble of Eastman faculty noted for their performances of music for brass quintet, Reynolds was named a Kilbourn Professor, along with other ensemble members Barbara Butler, Charles Geyer, John Marcellus, and Cherry Beauregard.

The memorial concert will honor Professor Reynolds for his contributions as a teacher, composer, performer, and mentor.

“Mr. Reynolds was not only my horn professor, but a mentor in every way, and also a very dear friend,” said Janine Gaboury, Associate Professor of Horn at Michigan State University College of Music and Principal Horn of the Lansing Symphony Orchestra. “He not only passed on his gift of music and horn playing, but even more importantly he taught me to truly see what I was capable of accomplishing. His incredible intellect, combined with his musical artistry, was formidable.”

Soloists will perform alongside chamber groups the Eastman Horn Choir, Alumni Horn Choir, and Eastman Brass, in a program including Reynolds’ works Florilegium; Songs and Narration of Death and Remembrance; Suite for Brass Quintet; and Quintet for Horn and Strings.  The concert program will also include works by Weelkes, Scheidt, Saint Saëns, Brahms, Mendelssohn, and Haydn.

“The brass world will miss him,” said Beauregard, who was Professor of Tuba and a member of the Eastman Brass. “He was one of the most intelligent men I’ve ever known, austere but with a sense of humor. He was a wonderful horn player and a fantastic composer.”