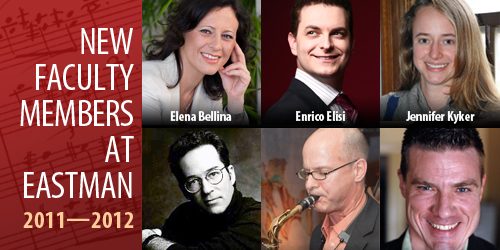 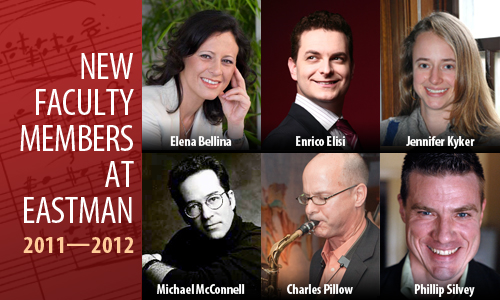 The Eastman School of Music has announced the appointment of six distinguished performers and scholars to its faculty for the 2011-2012 year:

Enrico Elisi, Associate Professor of Piano. Enrico Elisi regularly performs to acclaim with major orchestras and in major venues throughout the Americas, Europe, and Asia. Among his awards are top prizes in the Venice Competition and the Oporto International Competition. He has been featured on radio broadcasts in Europe and the United States. As an active chamber musician, Elisi has performed at the Taos and Ravinia Festivals and given chamber recitals in China, Korea, France, and Peru. As a champion of new music, Elisi has commissioned works from composers of many nationalities. He has been the artistic director of the Piano Institute of the Las Vegas Music Festival and is co-founder/artistic director of the Green Valley Chamber Music Festival. He has served as a jury member for the Trempline International, the finals of the Concours de Musique du Canada, and other music competitions. Elisi earned diplomas from the Conservatory of Florence and the Incontri col Maestro International Piano Academy of Imola, and his master’s and doctoral degrees at the Peabody Institute of Johns Hopkins University. He previously taught at Pennsylvania State University and the University of Nevada Las Vegas.

Elena Bellina, Assistant Professor of Italian. Elena Bellina’s areas of expertise include autobiographical writing, modern and contemporary Italian literature, poetry, literary theory and criticism, and gender studies. At New York University, she organized the conference “Ambience in the Humanities: Translating New Surroundings into New Poetics” as well as interdisciplinary roundtables on violence, poetry, and war. Her publications include About Face: Depicting the Self in the Written and Visual Arts; State of Exception: Cultural Reponses to the Rhetoric of Fear; a forthcoming essay on Sinan Antoon and the Italian translation of Antoon’s poetry collection The Baghdad Blues; the dossier “Thinking Through Violence” in the online edition of Social Text; and essays on composer Thea Musgrave, British novelist Angela Carter, and Italian author Elena Ferrante. Bellina earned degrees from the Conservatory of Music of Verona and the University of Bergamo, received her master’s in English from Youngstown State University, and is completing her Ph.D. dissertation at New York University on autobiographical writing in confinement, focusing on writings by Italian prisoners of war during WWII.

Jennifer Kyker, Assistant Professor of Ethnomusicology.  Jennifer Kyker received her Ph.D. from the University of Pennsylvania. Supported by a Fulbright-Hays Fellowship, her doctoral research explored issues of audience reception in postcolonial Zimbabwean popular music. In addition, Kyker has a long history of studying the mbira dzavadzimu, an instrument played at various ritual events within Zimbabwe. Her research interests include how women navigate expectations of gender in mbira performance and the evolution of neo-traditional musical styles, such as the contemporary Zimbabwean marimba. Working with musicians from Zimbabwe, Kyker has produced several albums ranging from her field recordings of the chipendani, a single-string mouthbow, to a compilation of songs by a new generation of Zimbabwean popular artists. Her interviews with Zimbabwean artists have additionally received national exposure through their inclusion on the nationally syndicated radio program Afropop Worldwide. She is the founder of the nonprofit organization Tariro, which works to educate and empower teenaged girls in Zimbabwean communities affected by HIV/AIDS.

Michael McConnell, Assistant Professor of Opera. Michael McConnell has served as Associate Professor of Opera at Florida State University, Executive Director of Lyric Opera Cleveland, and Director of Opera at The Cleveland Institute of Music. McConnell received his musical training at the University of Cincinnati’s College-Conservatory of Music, and began his career on the production staffs of the Santa Fe Opera, Opera Theater of Saint Louis, and the Cincinnati Opera, assisting Gian Carlo Menotti, Frank Cosaro, James deBlasis, and Colin Graham. His productions have been successfully mounted by such organizations as Opera Theater of Saint Louis, Opera Memphis, Skylight Opera Theater, Cincinnati Opera, and The Cleveland Orchestra. His articles and reviews have been published in Opera News, The Music Journal, and other publications.  McConnell is a frequent panelist for the National Endowment for the Arts and has served on the Board of Directors of Opera America. His directorial work has included Sweeney Todd for Dayton’s Human Race Theatre; Tosca for Mississippi Opera; La Traviata for Opera Memphis; and Il Giovedi Grasso for Opera Lucca.

Charles Pillow, Assistant Professor of Jazz Saxophone. A fluent performer, teacher, and touring musician, Charles Pillow has performed on more than 100 recordings of jazz and pop artists, including those of Michael Brecker, Maria Schneider, David Sanborn, Joe Henderson, John Scofield, Bob Mintzer, Bob Belden, Jay Z, David Liebman, Maria Carey, Chaka Khan, and Luther Vandross. Considered one of the premier woodwind multi-instrumentalists of today, he has 5 CDs to his credit. His orchestration of Mussorgsky’s “Pictures at an Exhibition” and Gustav Holst’s “The Planets,” both on ArtistShare, and “Van Gogh Letters” on ELCM, earned him critical acclaim, with ALLABOUTMAZZ.COM writing, “Pillow is on the cutting edge of a trend. He ushers in a previously unexploited way to enliven and extend jazz.” Publications by Pillow include The Art of Doubling: A Saxophonist’s Guide to Flute, Clarinet and Oboe; Jazz Etudes on Great American Standards for Flute and Clarinet; and Jazz Oboe: Method and Play Along.

Phillip Silvey, Assistant Professor of Music Education. Phillip Silvey is achieving acclaim as a choral music educator and composer. He has served as a guest conductor, clinician, and adjudicator in numerous states and directed all-state choruses in both Maryland and Virginia. Silvey contributed to the textbook series Experiencing Choral Music and Teaching Music through Performance in Choir, Volumes II and III, and his scholarly writings have appeared in the Journal of Research in Music Education and the Arts and Learning Research Journal.  His original choral compositions and arrangements are published by Santa Barbara Music.  Previously, Silvey served on the faculties of the University of Maryland, Baldwin-Wallace Conservatory, and in secondary vocal music programs in Michigan.  He holds degrees in composition from Houghton College and the Pennsylvania State University, and a doctorate in music education from the University of Illinois.