Stanley Hasty, Professor Emeritus of Clarinet at the Eastman School of Music, died Wednesday, June 22. He was 91 years old.

One of the most highly regarded and successful clarinetists and teachers of his time, Professor Hasty held the position of principal clarinet in six major orchestras and served on the faculty of several of the nation’s top music schools. Many of his students went on to hold significant positions in orchestras and music institutions across the country. He taught at the Eastman School of Music from 1955 until his retirement in 1985.

In May 2010, many of Professor Hasty’s former students from the Eastman School returned to Rochester to celebrate his 90th birthday. During ClarinetFest 2010 held in July in Austin, Tex., a lecture and concert in his honor were presented by former students.

“Ask a musician what led them to choose a career in music and they will always point to events or teachers who inspired them. Ask a former Hasty student that question and they will say Stanley Hasty,” said Ramon Ricker, Senior Associate Dean for Professional Studies at Eastman and one of Professor Hasty’s former students. “As musicians, we know that our skill, musicianship and artistry aren’t developed in a vacuum. We build on the shoulders of the previous generation. Stanley Hasty – artist, teacher, mentor, friend – had big, big shoulders. He will be missed by generations of students.”

In 1955, Professor Hasty joined the Eastman School faculty and the Rochester Philharmonic Orchestra, where he served as principal clarinetist until 1970. In addition to Eastman, he also taught at the Cleveland Institute of Music, the Juilliard School, and the New England Conservatory of Music during that time.

“Stanley Hasty was quite simply one of the most important people in my life and a mentor who influences my teaching and playing to this day,” said Elsa Ludewig-Verdehr, Professor of Clarinet at Michigan State University’s School of Music and a founding member of the Verdehr Trio. She received her Doctor of Musical Arts degree at Eastman.  “He made it possible to do whatever I have achieved in my career and life through the logic and clarity of his teaching, the musical principles he espoused as well as the example he set as a person, teacher and performer. Those of us who studied with him were privileged beyond measure – we knew it then, we know it now and will always carry within ourselves the remembrance of the time we spent with him.”

Respected as an eminent teacher, Professor Hasty received the Eastman School of Music’s Eisenhart Award for Excellence in Teaching in 1978. He also received the University of Rochester’s Mentor Award in 1984 for his outstanding contributions as a distinguished scholar and outstanding teacher. The Eastman School is the first professional school of the University of Rochester.

To celebrate Professor Hasty’s 25 years of teaching at Eastman, the School presented the “Hasty Festival” in 1980. The four-day event featured seminars, master classes and concerts.

“Stan’s example and often his exact words have inspired my teaching. He will always be with me, as he is with all of his former students,” said Michael Webster, professor of clarinet at Rice University’s Shepherd School of Music, who earned his bachelor’s, master’s, and doctoral degrees at Eastman. “He has taken his place as one of the great icons of clarinet performance and pedagogy. We will always remember him not only for his musicianship, perception, intelligence, wit, and insight, but also for his great humanity.”

After his retirement from Eastman in 1985, Professor Hasty continued to travel throughout the United States and Canada as a recitalist, lecturer, clinician, and adjudicator.

“Stan Hasty combined the analytical skills of a research scientist with the soul of a poet. The clarity and logic he applied to playing and teaching the instrument was surpassed only by the wonderful insights he brought to the music,” said Lawrence Maxey, Professor Emeritus of Clarinet at the University of Kansas School of Music and former principal clarinetist of the Kansas City Chamber Orchestra. Maxey received his master’s and doctoral degrees at the Eastman School. “I used to leave lessons and immediately sit down outside his door to write down everything I could remember from the previous hour. Stan was a living legend, and the love and respect that his students had for him was reflected by the turnout of nearly 100 of us from all over the country for his 90th birthday celebration.”

“The clarinet world has lost one of its legendary and most impactful clarinet teachers. Stanley Hasty’s legacy will be remembered for generations of clarinetists to come,” said Diana Haskell, associate principal and E-flat clarinet of the St. Louis Symphony. She received her bachelor’s degree at Eastman. “Mr. Hasty was wise, gifted, strong, caring, good-hearted, and brilliant. He was a mentor to me not only at Eastman but more than a few times during my career. There is not a day that goes by that I do not think about something he said. At his 90th birthday celebration, one of Mr. Hasty’s students said it best, ‘He taught me how to succeed not just as a clarinet player, but how to succeed in life.’”

The long list of Professor Hasty’s former students also includes such people as Kenneth Grant, principal clarinet and the Robert J. Strasenburgh Chair of the Rochester Philharmonic Orchestra; Larry Combs, principal clarinet of the Chicago Symphony Orchestra from 1978 to 2008 and currently a faculty member of DePaul University’s School of Music; and the late Peter Hadcock, assistant principal and E-flat clarinetist of the Boston Symphony Orchestra.

Professor Hasty is survived by his wife June; his daughters Jill Wilkerson and Jaqi Hasty (Walter Berger); his son Douglas Hasty; grandchildren Ariel and Tristan Berger and Schuyler and Carlin Hasty; and his brother-in-law Eugene (Diane) Mugrage. He was predeceased by his daughter Daryn Hasty.

A memorial service for Professor Hasty will be held on Saturday, Aug. 6, at 11 a.m. in St. Paul’s Episcopal Church, 25 Westminster Road at East Avenue in Rochester.  In lieu of flowers, donations can be made to the Saint Paul’s David Craighead Organ Restoration Fund. 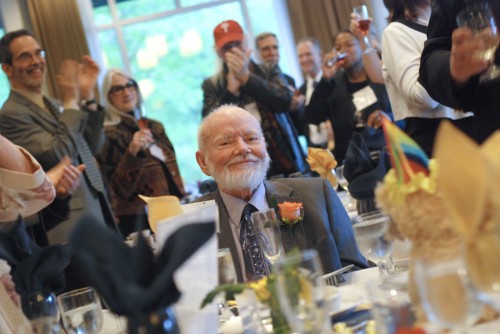 Professor Stanley Hasty at his 90th birthday celebration in 2010. (Photo by Gerry Szymanski.)