For the second time in less than a year, Eastman BroadBand will be performing in New York City. This time, the ensemble will give back-to-back performances at the Americas Society on Friday, May 13, and at Symphony Space on Saturday, May 14, as part of the Wall to Wall Sonidos Festival.

The program will feature the music of BroadBand conductor Juan Trigos and artistic directors Carlos Sanchez-Gutierrez and Ricardo Zohn-Muldoon. The works explore each composer’s imaginative interaction with the art of Paul Klee, the music of Bartók, the literature of Juan Rulfo and Italo Calvin, and the vernacular music of Mexico. The concert will include a premiere of Trigos’s Pulsación y Resonancias and Bagatella per Bartók.

Eastman BroadBand is “very pleased to return to New York City, and to share our passion for contemporary art music,” said Sanchez-Gutierrez. “The sextets and trios by Ricardo Zohn-Muldoon, Juan Trigos, and me that will be performed will showcase a more intimate side of Eastman BroadBand in works that demand virtuosic ensemble interplay. They will also reveal our distinct artistic voices against the background of the shared ‘poetic’ threads that bind the works as a cohesive program.”

Eastman BroadBand, a chamber ensemble at the Eastman School of Music, explores the many facets of contemporary music-making. Its repertoire includes modern classics, such as Ligeti, Lutoslawski, Birtwistle, and Carter, as well as recent music by living Mexican composers.

The ensemble has been recognized and invited to perform internationally and in the United States. Last fall, Eastman BroadBand gave a concert in New York City in advance of their invited performances at the Festival Internacional Cervantino in Mexico. Previous appearances include Festival SpazioMusic in Cagliari, Italy, and the 2008 Festival Internacional Chihuahua in Mexico. The ensemble also performed the premiere of choreographer Garth Fagan’s EDGE/Joy at the Joyce Theatre with the Garth Fagan Dance Company in November 2007. 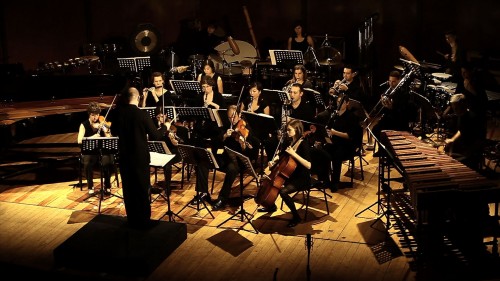