“Marty and Joan Messinger have built an extraordinary philanthropic legacy at the University,” said University President Joel Seligman. “Their longstanding commitment and generosity have enriched the academic experience for students and faculty. We are particularly grateful for this leadership gift that emphasizes the Eastman School’s preeminent role in music education.”

Messinger grew up in Irondequoit and earned a bachelor’s degree in economics and government at the University in 1949. He worked for Merrill Lynch & Co in Rochester during the 1950s and 1960s before joining the firm’s Executive Offices in New York City. Since 1973, Messinger has been managing partner of Neuberger & Berman, LLC.

The Messinger family has established a strong tradition of support for the University of Rochester, and Marty and Joan’s philanthropic commitments increased significantly following his appointment to the Board of Trustees. In addition to their personal contributions, a philanthropic foundation founded by Marty and Joan Messinger in 1998 has generously supported the University, a passion that extends to members of their family. Their daughter, Rabbi Sarah Jo Messinger, earned her degree in religious studies from the University of Rochester in 1982. She is joined by her sisters, Daryl, Alice, and Lisa in furthering the family’s philanthropic legacy through their Messinger Family Foundation involvement.

At the Eastman School of Music, the Messinger family’s generosity helped provide a new home for the Eastman Community Music School at 10 Gibbs St. The facility was dedicated in October 2005 in memory of Marty Messinger’s mother, Anne Waltuck Messinger, for her love of music. At the University, Messinger’s gifts have enabled Rush Rhees Library to renovate its Periodical Reading Room and create a dedicated space for graduate study rooms. Other areas that have benefited from the family’s philanthropy are the debate team, known as the Debate Union, the Goergen Athletic Center, the annual Library Recognition Award, and the Center for Jewish Studies.

“I am proud to be associated with the Eastman School of Music, one of the world’s premier institutions for music performance, scholarship and entrepreneurship,” said Mr. Messinger. “This commitment is just the beginning. It is my hope that others will join us in honoring the Eastman School’s legacy of innovation and artistry through generous endowed funding for its faculty leaders.”

“I am deeply honored,” said Douglas Lowry, “that Joan and Martin Messinger have so generously endowed the deanship of the Eastman School of Music. Marty has been a steadfast believer in the University, and his support of Eastman has been truly inspirational. Joan and Marty’s values, wisdom, and sense of family are only a few of their admirable traits, and we treasure their being part of the Eastman family.”

Since his arrival in August of 2007, Douglas Lowry has led the Eastman community in forging an ambitious strategic plan, “Empowering the Eastman Advantage.” The plan celebrates the rich traditional legacy of the school and positions it as a national leader in the future of music. Lowry has undertaken an expansion of Eastman’s international partnerships in China and Europe, having encouraged full deployment of the school’s leadership position in the use of Internet2 technology to create a series of “virtual partnerships” with prestigious institutions worldwide. He has founded the Center for Music Innovation and Engagement, under the Institute for Music Leadership, as an incubator for new forms of music presentation.

Under his leadership, the School’s historic performance venue was renovated as Kodak Hall at Eastman Theatre, and the new Eastman East Wing, with state-of-the-art performance, rehearsal, and teaching spaces, was built. The renovation and expansion project — the biggest architectural transformation in the School’s history — was completed in December of 2010.

Lowry’s compositional work includes “Geo,” commissioned and premiered by Christopher Seaman and the Rochester Philharmonic, and which opened the dedication concert of the new Kodak Hall at Eastman Theatre on October 8, 2009. Since then he has composed works celebrating the birthday of Eastman composer David Liptak, a fanfare for the dedication of the Dale Chihuly “Blue and Gold Chandelier,” and two chamber pieces. He has also conducted both the Eastman Philharmonia and the Eastman School Symphony Orchestra.

As the Eastman School of Music prepares to mark its 90th anniversary in 2011-2012, Lowry is committed to raising the profile of Eastman with events and special programs around the country. He re-entered the school into the marketplace of New York City, most notably with the appearance of the Eastman Virtuosi at Merkin Concert Hall and the Eastman Chamber Jazz Ensemble at St. Peter’s Church.

Lowry will be officially installed as The Joan and Martin Messinger Dean of the Eastman School of Music in September 2011. 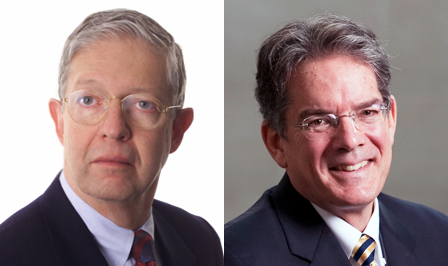 Martin E. Messinger, left, and his wife Joan have made a commitment to endow the position of Dean. Douglas Lowry, right, the School’s sixth dean, will be named the first Joan and Martin Messinger Dean of the Eastman School of Music.