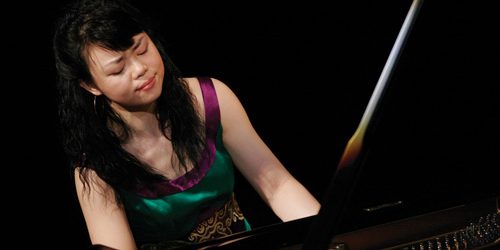 Sa Chen, the only pianist to win prizes at all three of the world’s top piano competitions — the Leeds, Chopin, and Van Cliburn — wraps up the 2010-2011 Kilbourn Concert Series at the Eastman School of Music on Tuesday, March 22, at 8 p.m.

She will perform a wide-ranging and technically challenging program that includes Scarlatti sonatas, Ravel’s “Gaspard de la nuit,” and Liszt’s “Un Sospiro,” Ballade No. 2, and Hungarian Rhapsody no. 12.

Widely acclaimed as one of the most gifted and thoughtful pianists to emerge from China in recent years, Chen has mesmerized audiences in Europe, Asia, Australia, and in the United States.  As a soloist, she has worked with distinguished conductors including Semyon Bychokov, Edo de Waart, Leonard Slatkin, and Krysztof Penderecki and performed with orchestras such as the Los Angeles Philharmonic, Royal Stockholm Philharmonic, Bremen Philharmonic, and Hong Kong Philharmonic. She has released three recordings and was featured in The Heart of Music and Encore, documentaries about the 2005 Van Cliburn Competition.

Born in Chongqing, China, Chen began her musical studies at the Sichuan Conservatory of Music. She first came to attention outside China in 1996 when she took fourth prize in the Leeds International Piano Competition, where she was the youngest participant.

Tickets to Sa Chen’s Kilbourn Concert Series performance are $10 to $20 (discounts with UR ID) and are available at the Eastman Theatre Box Office in the Eastman East Wing, 433 East Main St., by phone 585-454-2100; or online at www.esm.rochester.edu/concerts/tickets.php .