Renée Fleming, ‘The People’s Diva,’ Returns To Her Alma Mater To Perform with the Eastman Philharmonia In a Concert to Benefit the Eastman School of Music 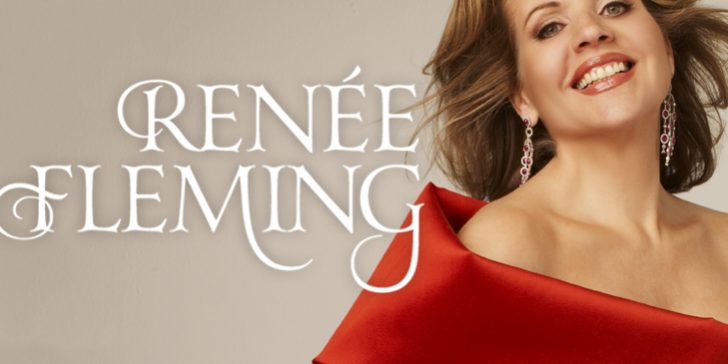 Renée Fleming, the world’s most sought-after and beloved soprano, will be returning to her hometown and alma mater to perform with the Eastman Philharmonia under the direction of Neil Varon in a benefit concert for the Renée Fleming Endowed Scholarship Fund at the Eastman School of Music.

“Renée Fleming’s performance at our official gala to celebrate the renovated Eastman Theatre and expanded Eastman School will be an event for the history books. She is a consummate artist; this is an event we have waited close to 90 years to celebrate,” said Joel Seligman, President of the University of Rochester. The University will present Fleming the honorary degree of Doctor of Music.

The event is sponsored by the University’s Eastman School of Music, with generous support provided by Canandaigua National Bank & Trust; HSBC Bank USA, N.A.; and First Niagara Financial Group. The Renée Fleming Endowed Scholarship Fund will support students in the voice and opera program at Eastman.

“We’re ecstatic about Ms. Fleming’s return and performance at Eastman,” said Douglas Lowry, Dean of the Eastman School of Music. “Given her extraordinary stature as an artist, we consider it fitting to call this the signature event celebrating the new Kodak Hall at Eastman Theatre.”

The concert with the Eastman Philharmonia, under the direction of Neil Varon, will be presented at 3 p.m. Sunday, Feb. 20, in Kodak Hall at Eastman Theatre.

Fleming, who received her Master of Music degree at Eastman in 1983, is celebrated by media and audiences alike for her sumptuous voice, consummate artistry, and compelling stage presence, and is known as “The People’s Diva.” The Times of London wrote she has “a voice as warm and rich as a fine single malt;” the Wall Street Journal claimed, “for sheer beauty of sound, no soprano today can match Renée Fleming;” and Billboard called her “the world’s greatest living soprano.” Because of her popularity and stature, her concert tours quickly sell out.

As a musical statesman, Fleming headlined the 2006 Nobel Peace Prize ceremony, performances during the 2008 Summer Olympic Games, and the 2009 inauguration concert for President Barack Obama. She has performed for royalty and, in 2008, became the first woman to solo headline an opening night gala at the Metropolitan Opera.

A passionate champion of creativity in the arts, Fleming has won three classical music Grammy Awards. In recent years, she has recorded everything from Strauss’s complete Daphne to the jazz album Haunted Heart to the movie soundtrack of The Lord of the Rings: The Return of the King. Last year she went further outside her genre with Dark Hope, a CD of songs by such artists as Leonard Cohen, Peter Gabriel, Arcade Fire, Death Cab for Cutie, and others.

Fleming has been awarded the Polar Music Prize, Sweden’s foremost musical honor and one of the most prestigious music prizes in the world; the Chevalier de La Legion d’Honneur (Knighthood in the Legion of Honor) from the French government; Honorary Membership in the Royal Academy of Music; and an Honorary Doctorate from The Juilliard School.

During the current season at the Metropolitan Opera, Fleming will perform in Rossini’s Armida in February and March (her Rochester appearance occurs right after the opera opens on Feb. 18) and in Strauss’s Capriccio in March and April. Her schedule this season takes her across Europe and North America for concerts with, among many others, the BBC Symphony Orchestra, the Munich Philharmonic, the Royal Stockholm Philharmonic, the Pittsburgh Symphony, the Lyric Opera of Chicago Orchestra, and the Toronto Symphony; and recitals in Montreal, New York City, Washington, D.C., San Juan, and other cities.

Tickets to Renée Fleming’s performance with the Eastman Philharmonia will be available beginning Jan. 17 at the Eastman Theatre Box Office in the Eastman East Wing, 433 East Main St., by phone 585-454-2100, or online at https://www.esm.rochester.edu/concerts/tickets . Tickets for the concert alone are $100 (discount for University of Rochester students with ID). Tickets that include attendance at a special post-concert reception or other activities with Fleming begin at $500. Information on these benefits and special sponsorship opportunities is available by calling (585) 274-1040.

More information on Fleming, including concert schedules, videos, reviews, and lists of recordings, is available on her web site http://www.reneefleming.com/ .