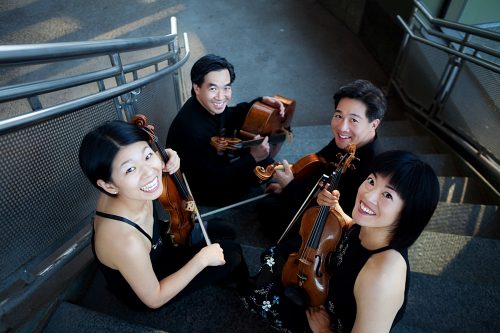 The Ying Quartet, quartet in residence at the Eastman School of Music, has received a Grammy nomination for Autumn: In Moving Pictures, a chamber jazz album from the Billy Childs Ensemble on which the Quartet is featured.

Acclaimed around the world for its communicative performances, the Ying Quartet appears in concerts and festivals such as Aspen, Tanglewood, San Miguel De Allende and many others. The ensemble is also known for its view of chamber music as a meaningful part of everyday life, which has fueled its diverse array of collaborative projects and audience outreach.

Cunliffe, a jazz composer, pianist, and arranger, was nominated for his work “fourth stream . . . La Banda.” The 16-minute concerto for trumpet and orchestra combines elements of classical, jazz, and world Latin percussion.

Cunliffe received his Master of Music degree at Eastman in 1981. While a student at Eastman, Cunliffe won several DownBeat Awards. He was a pianist and arranger with Buddy Rich, touring Europe with Frank Sinatra, and later performed with Ray Brown, Joe Henderson, Freddie Hubbard, Benny Golson, Woody Shaw, and James Moody. The winner of the 1989 Thelonious Monk International Jazz Piano Award, Cunliffe has also received nominations for Emmy Awards as a composer and arranger.