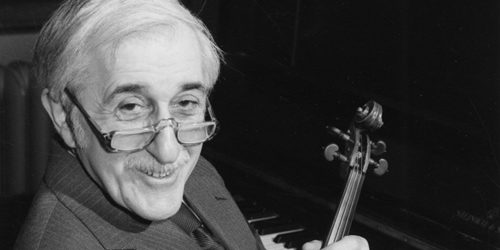 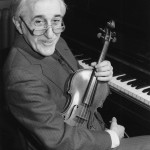 A group of Eastman School of Music faculty, former faculty, and graduates will gather to present a musical tribute to the late noted violinist and teacher John Celentano. Scheduled for 3 p.m. Sunday, Sept. 12, in the School’s Kilbourn Hall, the memorial concert is free and open to the public and will feature a 1958 audio recording of The Eastman String Quartet with Professor Celentano.

Professor Celentano, who died last year at the age of 96, taught violin and chamber music at Eastman School for 35 years and also served as String Department chair. His seven-decade career included two Eastman degrees, six years as assistant concertmaster of the Rochester Philharmonic Orchestra, and solo and chamber music performances throughout the country.  He was named Distinguished Professor Emeritus of Chamber Music and remained active as a chamber music coach after his retirement in 1981.

Key in bringing together the performers and the program for the John Celentano Memorial Concert have been Peter Salaff, head of the String Chamber Program at the Cleveland Institute of Music, and pianist Barry Snyder, who has taught at the Eastman School for 40 years.

Salaff, a founder and violinist in the Cleveland Quartet, noted, “When the Cleveland Quartet was hired to teach at Eastman, I had the joy of sharing a teaching studio with Mr. Celentano. As a mentor, he was always there for me when I had a musical or pedagogical question. He was so giving of his time and expertise. His guidance was a profound part of my life as I’m sure it was to other students and colleagues.”

The concerts honor Professor Celentano for his contributions to and his love of the Eastman School of Music and teaching.

“John Celentano represented the finest in musical intent and mentoring,” said Snyder. “Added to these outstanding qualities, his sincere humanity permeated not only his performances, but his teaching. John Celentano was unique and a musical treasure of the Eastman School of Music.”

Guest artists for the Sept. 12 concert are pianist David Abbott, associate professor of piano at Albion College; Eastman graduate and violinist Darwyn Apple of the St. Louis Symphony Orchestra; Eastman graduate and pianist Bradford Gowen,  a soloist and chair of the piano division at the University of Maryland School of Music; Eastman graduate and cellist Barbara Haffner, assistant principal cellist of the Lyric Opera of Chicago Orchestra and principal cellist with the Chicago Philharmonic Orchestra; and cellist Marc Johnson, who performed with the renowned Vermeer Quartet for 35 years and has appeared in recitals and as a soloist with orchestras in North America and Europe.

The program will include a 1958 recording made in Kilbourn Hall featuring the Eastman String Quartet’s performance of the Adagio of Schubert’s Quintet in C Major.

“The performance is one of the recordings Professor Celentano gave to me, and it includes one of the most beautiful slow movements ever written,” noted Salaff.

The concert program will also include works by Dvorak, Haydn, Mendelssohn, Faure, and Brahms. For more information, contact the Eastman School of Music concert office, (585) 274-1110.

Eastman School of Music faculty and alumni in a tribute concert to the late Eastman professor of chamber music.