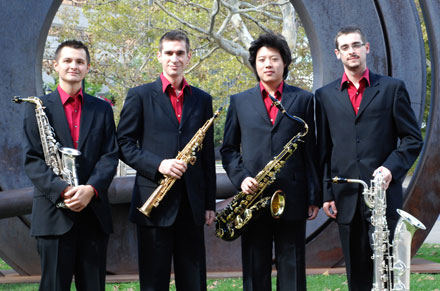 For the second time in less than two months, the Red Line Saxophone Quartet has taken home a top honor from a major national chamber music competition.

The ensemble of Eastman musicians was awarded a Gold Medal in the senior wind division of the 2009 Fischoff Chamber Music Competition, which was held May 8 to 10 at the University of Notre Dame. Red Line, which includes juniors Brandon Kies, alto sax, Gai Qun, tenor sax, and Quinn Lewis, baritone sax, and doctoral student Douglas O’Connor, soprano sax, won $3,000 for their first-place performance.

Now in its 36th year, the Fischoff Competition is the largest chamber music competition in the world and attracts the finest young instrumentalists from around the globe.

In late March, the Red Line Saxophone Quartet won first prize in the Music Teachers National Association Chamber Music Competition. The group will be recording their its first CD this month. Members of the ensemble are from the saxophone studios of Eastman School professor Chien-Kwan Lin and Ramon Ricker.