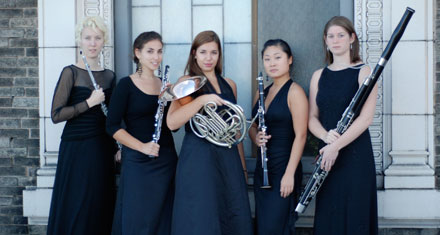 Arabesque Winds, a woodwind quintet of Eastman School of Music musicians, has added another major award to its resume. The ensemble has won the Coleman-Saunderson Prize for Woodwinds and Brass in the 63rd annual Coleman Chamber Ensemble Competition.

The award comes on the eve of the quintet’s May 22 recital in Washington, D.C., where Arabesque Winds is representing Eastman in the prestigious Conservatory Project of the John F. Kennedy Center for the Performing Arts. Local audiences can get a preview of the Kennedy Center concert and hear the award-winning quintet when the group presents a free “send-off concert” at 8 p.m. Friday, May 8, in Kilbourn Hall.

Arabesque Winds is composed of Deidre Huckabay, flute; Liz Spector, oboe; Isabel Kim, clarinet; Eryn Bauer, bassoon; and Sophia Goluses, horn. Since it was formed at the Eastman School in 2005, the ensemble has earned several major honors. In 2008, Arabesque Winds was awarded the Grand Prize in the International Chamber Music Ensemble Competition. As winners of the Harvard Musical Association’s 2009 Arthur W. Foote Prize, the group presented an award concert in Boston in mid-April. In February of this year, the ensemble won second prize at the Henri Tomasi International Woodwind Quintet Competition in France, where they were also presented the Lucien Guerinel Prize for best interpretation of Guerinel’s commissioned work for the competition.

At the Eastman School, the Arabesque Winds ensemble has been coached by Robert DiLutis, Anne Harrow, and Kenneth Grant. They served as ensemble-in-residence at the 2008 Festival Internacional Chihuahua in Mexico, collaborated with the Rochester City Ballet to present Prokofiev’s Peter and the Wolf earlier this year, and have been selected to be fellows at the Atlantic Music Festival this summer as resident performers and teachers.

“The Arabesque Winds represent the Eastman ideal: superb artistry, technical excellence, musicianship informed by scholarship, and a passion to engage audiences in the concert hall and in the community,” said Phillip Ying, associate professor of chamber music and of viola at the Eastman School and violist in the Ying Quartet, the School’s string quartet-in-residence.

Eastman was a founding participant of the Kennedy Center Conservatory Project, which was launched in 2004 to “showcase our nation’s exceptional young talent and introduce Washington audiences to young musicians destined to have important careers.” The semi-annual event presents outstanding artists in classical music, jazz, musical theater, and opera from the nation’s leading conservatories and music schools.

Friday, May 8
8 p.m.
Arabesque Winds Concert. The award-winning woodwind quintet performs works by Bozza, Barber, Hindemith, Klughard, and Ligeti in advance of their May 22 concert at the Kennedy Center for the Performing Arts.
Kilbourn Hall, 26 Gibbs St.
Free Admission.