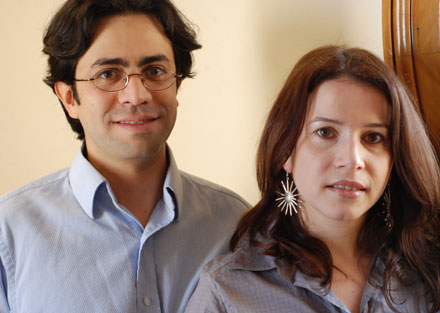 A work by Jairo Duarte-López and Michaela Eremiášová will be performed by New York City Opera this weekend. Photo by Gerry Szymanski.

The annual festival, which is being held on Friday, May 1, and Saturday, May 2, at the Skirball Center for the Performing Arts at New York University, provides emerging and established American composers and librettists the opportunity to hear their works performed by a full orchestra and world-class singers.

Car Crash Opera, co-composed by Eremiášová and Duarte-López, is one of only eight new works, chosen from some 80 submissions, that will be presented along with two pieces previously performed at VOX. All the selections will be performed by New York City Opera soloists and accompanied by the City Opera Orchestra.

Car Crash Opera was commissioned as the music score for a short feature by filmmaker and Rochester Institute of Technology Professor Skip Battaglia. Knowing that the production of the eight-minute animated film would take close to two years, the composers approached the opera not only as a film score but also as a stand-alone composition. The music uses several styles to depict the opera’s characters as they head toward a fatal collision. After the accident, the singers join as a choir of souls to depict images of horror, tragedy, and mourning. The work will be presented at 3:30 p.m. on Saturday, May 2.

In nine seasons of presenting VOX, New York City Opera has showcased excerpts from more than 90 new operas, more than 30 of which have gone on to full productions at companies across the country.

Eremiášová holds a degree in jazz composition from Berklee College of Music and a master’s degree in musicology from Charles University in Prague. She has received commissions from jazz big band and concert music ensembles and also has collaborated with painters, poets, and modern dance choreographers. Her work has received awards from the Park City Film Music Festival, Open APPerture Short Film Festival, and others.

Duarte-López holds a degree in film scoring from Berklee College of Music and a master’s degree in composition from the Eastman School. His work has been performed by Eastman Triana, Musica Nova, and other ensembles. He is the winner of the 2007 National Prize in Music Composition awarded by the Ministry of Culture of Colombia. Most recently, his work was featured at the 2008 New Music Festival at Bowling Green State University.

Both Eremiášová and Duarte-López are completing a Ph.D. in composition at Eastman.