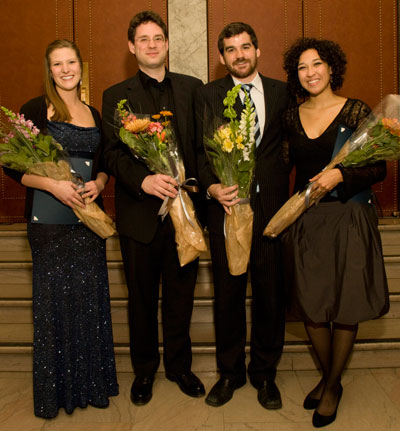 Matson, a soprano, placed first in this year’s event and was awarded the Lynne Clarke Vocal Prize in the amount of $1,000. The prize, donated by John Clarke, is named in honor of his late wife, a founding member of the Friends of Eastman Opera. Matson is a second year master’s degree student in the studio of Rita Shane. Her various performance experiences include covering the role of Nannetta in Verdi’s Falstaff with the Florida State Opera and performing as Gretel in Humperdinck’s Hansel and Gretel with the Opera Outreach program. For Eastman Opera Theatre, she performed the role of Hanna in The Merry Widow last spring and was seen as the Governess in this fall’s production of The Turn of the Screw.

Bullock, a soprano and a senior in Eastman’s Bachelor of Music program studying with Carol Webber, received the $750 second prize. She is the recipient of this year’s William Warfield Scholarship at Eastman School and made her Eastman opera premiere as Monica in The Medium in January 2008. She has given public recitals and performed in productions of The Municipal Opera Association in her hometown of St. Louis.

The third prize of $500 went to Arnold, a baritone and a second year master’s degree student in the studio of Robert Swensen. He has performed in such operas as Falstaff, Don Giovanni, Hansel and Gretel, Carmen, Giulio Cesare, and The Merry Widow, and is currently working on Eastman Opera Theatre’s winter production of Les mamelles de Tiresias by Poulenc.

The adjudicator for the finals was Thomas Lausmann, who, as assistant to the music director of the Komische Oper Berlin, is responsible for the musical preparation of new main stage productions, participates in casting, and is the music director of the company’s opera studio. In addition, Lausmann serves on the music staffs of the Bayreuther Festspiele, the Washington National Opera, and Wolf Trap Opera.