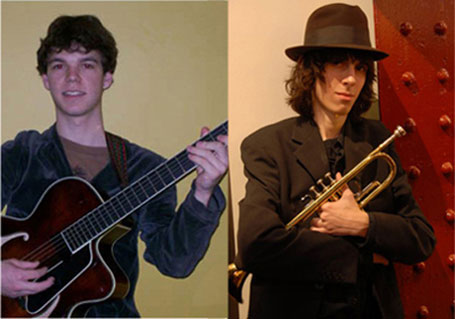 Two School of the Arts seniors, a guitarist who has already garnered national attention and a trumpeter-composer whose work will be played at an upcoming Rochester Philharmonic Orchestra concert, have been named the first Eastman Pathways Fellows at the Eastman School of Music.

Adrian DiMatteo and Evan Henry are the recipients of full tuition scholarships to study jazz and contemporary media at Eastman beginning this fall. The two have been students in the Eastman Community Music School through Eastman Pathways, a partnership of the Eastman School of Music and the Rochester City School District. The initiative was launched in 1997 to help talented and motivated Rochester City School District middle and high school students pursue music studies at the Community Music School by providing them with scholarship assistance. Now, as Eastman Pathways Fellows, DiMatteo and Henry will also serve as ambassadors for the program to Rochester City School District students and teachers, giving talks and performances while continuing their musical studies.

“We are very proud of their musical and academic achievements, and I am delighted to welcome them to collegiate study at Eastman,” said Dean Douglas Lowry. “Our Pathways partnership with the Rochester City School District truly brings ‘the Eastman Advantage’ to the greater community.”

Adrian DiMatteo has been playing guitar for more than five years. In 2006, he competed in Guitarmageddon, a national competition sponsored by Gibson Guitars and Guitar Center Inc., beating out other competitors, both young and adult, to become one of six finalists. He was twice a runner-up for the Grammy Foundation’s National Jazz Ensemble and received an honorable mention in a nationwide scholarship talent search sponsored by the National Foundation for Advancement in the Arts.

While a student in the Eastman Community Music School, DiMatteo performed with the Eastman Youth Jazz Orchestra and Combo, and he also played in the Senior Jazz Ensemble and Senior Jazz Combo at the School of the Arts.

“Adrian has shown extraordinary artistry from his first day,” said Bob Sneider, who has taught DiMatteo for the past four years. “Everything Adrian plays is steeped in the jazz and blues tradition, but in a style uniquely his own. He has earned the respect and admiration of his peers and teachers by the way in which he plays and carries himself.”

Evan Henry is the first student in the Eastman Community Music School to win honors in both jazz and classical trumpet. He has been principal trumpet for the Rochester Philharmonic Youth Orchestra and the Community Music School’s trumpet ensemble and also plays with the Eastman Youth Jazz Orchestra as well as jazz groups at the School of the Arts.

As a composer, Henry has written works for Community Music School ensembles, including a fanfare for the school’s recent graduation. His “Sonata for Brass” was premiered at the Rochester Philharmonic Orchestra’s orKIDStra concert in April by the Rochester Philharmonic Youth Orchestra and Hochstein Youth Symphony Orchestra; the RPO will perform the work during its Aug. 2 concert at CMAC (Constellation Brands Performing Arts Center).

“I believe Evan’s biggest strength is his creativity; I can hear it in his jazz improvisation and also in his composition,” said his teacher Wes Nance. “Evan is an extremely talented musician, who has just begun to scratch the surface of his potential, and will be an exciting musician to watch in the next four years.”

To enter the Eastman Pathways program, students must be recommended by their Rochester City School District music teachers and undergo an audition process. Once accepted, students must remain in good academic standing while displaying musical progress and must reapply to the program annually. Approximately 75 Rochester City School District students participate in the program each year. In order to become Eastman Pathways Fellows, students must have at least two years of study at the Eastman Community Music School and meet the admissions requirements for collegiate study at the Eastman School of Music.

“We are very proud of Adrian and Evan,” said Howard Potter, Eastman’s associate dean for community and continuing education. “They have been role models in the Community Music School and have demonstrated what can be achieved with dedication, hard work, and commitment to one’s musical studies.”

Eastman Pathways is funded by an endowment made possible through the Talented Students in the Arts Initiative, a joint initiative of the Doris Duke Charitable Foundation and the Surdna Foundation, and by the Eastman School of Music, with generous assistance from local and national foundations, corporations, and individuals. More information about the program can be found online at http://esm.rochester.edu/community/pathways/.