A unique ensemble of Eastman School of Music jazz students will represent the School at the John F. Kennedy Center for the Performing Arts later this month in the Center’s prestigious Conservatory Project. “Triple Threat,” three pianists who alternate in the familiar jazz piano trio setting with bass and drums, will perform tunes by Charlie Parker, Duke Ellington, Rodgers and Hammerstein, Harold Arlen, Cole Porter, and original works on Wednesday, May 21, as part of the concert series.

Eastman was a founding participant of the Kennedy Center Conservatory Project, which was launched in 2004 to “showcase our nation’s exceptional young talent and introduce Washington audiences to young musicians destined to have important careers.” The semi-annual event presents outstanding artists in classical music, jazz, musical theater, and opera from the nation’s leading conservatories and music schools.

Triple Threat is composed of jazz pianists Jeremy Siskind, Matthew Valerio, and Chris Ziemba, who will be joined on stage by Jesse Breheney on bass and Dave Tedeschi on drums. The student musicians, all of whom are seniors, are coached by pianist Harold Danko, chair of the Department of Jazz Studies and Contemporary Media.

“Triple Threat is a quintet of outstanding young musicians that manages to treat its audience to three jazz piano trios—each one distinct and very musical,” said Danko. “Through it all, their talent and friendship shines, and Eastman is well represented. I’m very happy that the Kennedy Center will present them to “a wider audience.”

Siskind, from Irvine, Calif., was a featured guest on Marian McPartland’s Piano Jazz on National Public Radio and is the youngest-ever winner of the ASCAP Young Jazz Composer’s Award. In 2007, he released his first recording, Prophecy, a collection of original material for piano trio.

Valerio, who’s from Rochester, received The Outstanding Piano Soloist Award in the 2003 Essentially Ellington Competition at Lincoln Center Jazz. He leads the Matt Valerio Band, which has performed at the Rochester International Jazz Festival and the Lilac Festival.

Ziemba, of Williamsville, has performed regularly at the Rochester International Jazz Festival and, along with Siskind, was one of four pianists accepted into this spring’s Professional Training Workshop at Carnegie Hall with renowned jazz pianist and composer Fred Hersch.

Growing up in Newburgh, Breheney started performing in local clubs in his mid-teens. He maintains an active freelancing schedule, working with prominent musicians in the area as well as at engagements in Michigan, Massachusetts, and California.

Tedeschi, from Green Bay, Wis., studies in the studio of Rich Thompson and performs on Siskind’s Prophecy CD along with Breheney. 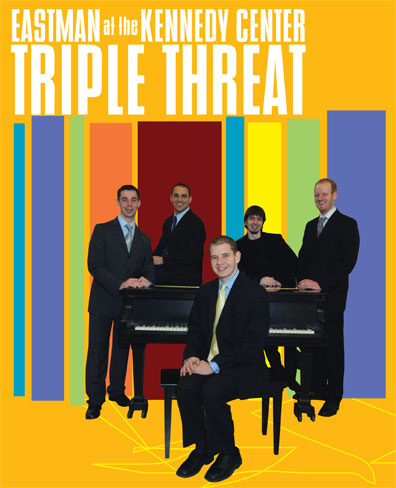