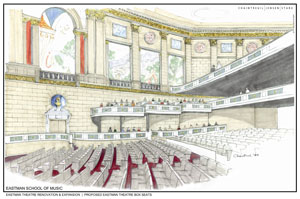 ROCHESTER, N.Y.—Building on the community legacy and vision of founder George Eastman, Eastman Kodak Company is providing $10 million to the University of Rochester to support the renovation and expansion of Eastman Theatre. The project, which includes the addition of a building for teaching and performance spaces, will complete Eastman’s original plan for the University’s Eastman School of Music and Eastman Theatre.

In recognition of Kodak’s major support, the performance hall will be renamed “Kodak Hall at Eastman Theatre” when the renovations are completed.

“The University is deeply grateful for Kodak’s support, which reflects the long and enduring partnership between Kodak and the University of Rochester,” said University of Rochester President Joel Seligman. “Kodak’s investment will have far-reaching benefits for the Eastman School of Music, the Rochester Philharmonic Orchestra, and the people of Rochester, who will enjoy an enhanced performance hall and the economic development benefits that will come from construction and an increasingly vibrant cultural district downtown.”

“Kodak has had a close relationship and a strong partnership with the University and the RPO throughout their history, a bond that began with George Eastman, and is stronger today,” said Antonio M. Perez, Kodak’s Chairman and Chief Executive Officer. “We know the arts are important to our local economy and quality of life. This project will add to the rich cultural and educational vitality of our community, and help companies such as Kodak continue to offer employees not only a great place to work, but a vibrant place to live and raise their families.”

Kodak’s support is provided through the company’s Rochester Economic Development Fund, which was created in 2004 to invest in the local community. Today’s announcement is a natural extension of the longstanding relationship between Kodak, the University, and the RPO, and will also provide Kodak employees with various cultural and educational opportunities.

Eastman Theatre, an elegant 85-year-old Rochester landmark, was built by George Eastman and is owned by the University of Rochester. It is the home of the Eastman School of Music and the Rochester Philharmonic Orchestra, which presented its first concert in the theater in March 1923. Such luminaries as Igor Stravinsky, Leonard Bernstein, Beverly Sills, Louis Armstrong, George Gershwin, Marian McPartland, and Renée Fleming have performed on its stage. The theater is also used by a variety of community organizations for performances and special events such as high school graduations. Today, Eastman Theatre and the Eastman School’s smaller performance venues host more than 700 concerts each year.

“This is a defining moment,” said Douglas Lowry, Dean of the Eastman School of Music. “That our landmark theatrical venue will bear the name of the company founded by George Eastman is truly historic. Even more, the Eastman Theatre renovation and expansion project will enhance the School as a world leader in presenting new ideas and enterprises in music teaching and performance. Undoubtedly, Kodak’s support dramatically advances that cause.”

In a joint statement, Rochester Philharmonic Orchestra Music Director Christopher Seaman and President Charles Owens said, “The long-held dream of the Rochester Philharmonic Orchestra to have a world-class, 21st century concert hall in which to inspire and enrich our community has now become reality. With this support, Kodak and Mr. Perez have enabled us to fulfill one of our most critical strategic initiatives in creating a vibrant future for the Orchestra. The entire RPO family—our board, musicians, staff and patrons—is indebted to everyone who has worked so tirelessly to ensure the transformation of the RPO’s entire concert experience.”

Renovations at Eastman Theatre are designed to enhance the concert experience for the audience and performers. They include a plan to reduce the number of seats inside the main performance hall. When complete, Kodak Hall at Eastman Theatre will seat 2,250. The removal of some 800 seats at the back of the orchestra level will allow for the addition of box seats and expansion of the lobby, and will improve acoustics.

A new building, to be constructed adjacent to and connected to Eastman Theatre, will include a recital hall, a rehearsal hall large enough to accommodate large Eastman ensembles and the RPO, teaching studios for Eastman School faculty, and a new recording studio. The new wing’s entrance will draw patrons into a soaring atrium lobby that will be connected to the current Eastman Theatre lobby; the existing entrance doors to the theater will remain. The site of the addition was included in the original facility plans but was unavailable when ground was broken for the original building in 1920. The new wing will complete George Eastman’s original dream for the school and Eastman Theatre.

The University of Rochester has also received $13 million for the project from New York State, secured in 2007 under the leadership of Assemblyman Joseph Morelle and Assemblyman David Gantt. The estimated total cost for the project will be greater than $35 million.

Construction is scheduled to occur between July 2008 and late 2009 or early 2010. While the construction of the new addition will occur throughout the entire 18-month construction period, the renovation of the main hall at Eastman Theatre will occur during the summers of 2008 and 2009. The Rochester Philharmonic Orchestra season and Eastman School concerts presented in the theater during the academic year will not be affected.

George Eastman, the University of Rochester, and the Eastman School of Music

The relationship between the University of Rochester and Kodak reaches back to the bond that developed between University of Rochester President Rush Rhees and industrialist George Eastman. The two met not long after Rhees became the University’s president in 1900. The philanthropist held a deep affection for Rochester and the belief that improving the city’s quality of life would benefit his workforce. He made gifts to improve health, cultural, and educational facilities in the city.

Personally interested in music, Eastman suggested to Rhees that the University should have a professional school of music. To that end, the industrialist purchased the struggling D.K.G. Institute of Musical Art and gave the property and corporate rights to the University. He acquired the property on which the new school and theater were to be built, was involved in every aspect of planning and design, and stopped at the site almost every day during construction. The Eastman School of Music opened its doors to students in September 1921. Eastman Theatre opened one year later, on Sept. 4, 1922, the same year in which George Eastman founded the Rochester Philharmonic Orchestra.

The theater was Eastman’s gift to the community. He saw the theater as having educational and cultural value in promoting the enjoyment of music and making Rochester an attractive community in which to live and work. Silent movies, prefaced by concert programs and accompanied by live music, were screened in the venue six days a week. One evening was reserved for concerts and recitals. During this era, the Rochester Philharmonic Orchestra presented its own concerts and a core of the orchestra, the Eastman Theatre Orchestra, performed symphonic music before and during silent film screenings.

Eastman’s papers, personal correspondence, and photographs are found in the Department of Rare Books and Special Collections at the
University’s Rush Rhees Library. In 2004, the library received millions of pages of original documents and photographs from Kodak that record the company’s history; the collection includes speeches, serial publications, annual reports, and files on topics as varied as cafeteria operations and picture contests.

About Kodak
As the world’s foremost imaging innovator, Kodak helps consumers, businesses, and creative professionals unleash the power of pictures and printing to enrich their lives.
To learn more, visit http://www.kodak.com, and Kodak’s blogs: 1000words.kodak.com and 1000nerds.kodak.com.

About the Eastman School of Music
The Eastman School is one of the world’s leading music schools, consistently placing at the top ranks in a range of surveys and evaluations. Most recently, Eastman was named “Hottest Music School” in the 2008 Kaplan/Newsweek college guide. The school is dedicated to providing students with an intensive professional education and entrepreneurial opportunities in their musical disciplines as well as opportunities for a broader liberal arts education within the context of a university.

About the Rochester Philharmonic Orchestra
Celebrating its 85th season in 2007-08, the Rochester Philharmonic Orchestra inspires and enriches the community through the art of music. Keeping alive the vision of its founder, George Eastman, the RPO is passionately dedicated to outstanding musical performance at the highest artistic levels, and has a unique tradition of musical versatility, commitment to music education in the broadest sense, and a deep and enduring engagement with the community. More than 350,000 people experience the RPO annually through its more than 100 concerts, an extensive array of education and community programs, and concert broadcasts on WXXI-FM. The RPO has been honored with the New York State Governor’s Arts Award and two recent ASCAP awards for adventurous programming. The current season marks the 10th Anniversary Season for the RPO’s acclaimed Music Director, Christopher Seaman, and next season marks the 15th Anniversary Season for the RPO’s celebrated Principal Pops Conductor, Jeff Tyzik.

NOTE TO EDITORS: Hi-resolution downloadable images are available at esm.rochester.edu/news/et_renovation_gallery.php