Jones, a baritone, placed first in this year’s competition and was awarded the Lynne Clarke Vocal Prize in the amount of $1,000. The prize is named in honor of the late wife of John Clarke, a founding member of the Friends of Eastman Opera. Jones, who is working on a Doctor of Musical Arts degree in the studio of Robert McIver, performed “Ya vas lyublyu” from Tchaikovsky’s The Queen of Spades and “Largo al factotum” from Rossini’s Il barbiere di Siviglia in the competition finals. He received his Bachelor and Master of Music degrees from Florida State University and has performed with the Eastman Opera Theatre, the Berkshire Opera Company, Florida State Opera, Rochester Philharmonic Orchestra, and the Tallahassee Symphony Orchestra.

Cramer, a soprano and a senior in Eastman’s Bachelor of Music program majoring in performance and music education, received the $750 second prize. Her competition arias were “Ach, ich liebte” from Mozart’s Die Entführung aus Dem Serail and “No word from Tom” from Stravinsky’s The Rake’s Progress. A student of Rita Shane, she has appeared in the Eastman Opera Theatre productions of Stephen Sondheim’s Assassins and A Little Night Music and will portray Judy in Lee Hoiby’s This is the Rill Speaking in January. This past summer, Cramer sang the role of Zerlina in Operafestival di Roma’s production of Don Giovanni.

The third prize of $500 went to Patrick, who performed “Cruda sorte” from L’Italiana in Algeri by Rossini and the “Composer’s Aria” from Ariadne auf Naxos by Richard Strauss. In 2006, Patrick was awarded second place in the Artist Award Competition of the National Association of Teachers of Singing. She also has won awards from the Rocky Mountain Region of the Metropolitan Opera National Council, the Denver Lyric Opera Guild, and the National Society of Arts and Letters. She will appear as Zerlina in Mercury Opera Rochester’s production of Don Giovanni in January. Patrick received a Bachelor of Music degree and Master of Arts degree in teaching from Trinity University, and a Master of Music from the University of Colorado. She is pursuing a Doctor of Musical Arts degree and studies with Robert McIver. 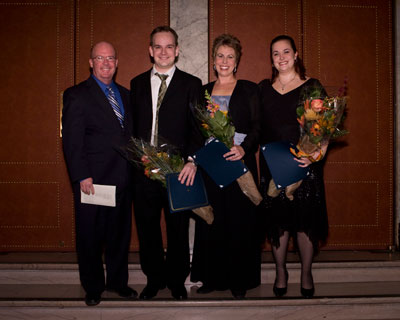 Darren K. Woods, left, was the adjudicator for this year’s Friends of Eastman Opera Voice Competition. Next to him, left to right, are Evan Jones, first place; Quinn Patrick, third place; and Julia Cramer, second place.