“Doug Lowry has been an extraordinarily successful academic leader as well as a composer and conductor of note,” said Seligman. “He will bring to Eastman the leadership, musicality, and drive to provide new energy to this nation’s leading school of music.”

“I am honored to be asked to serve the Eastman faculty and its many constituents as its new dean,” said Lowry. “I look forward to working with the entire Eastman community to further enhance the school’s presence in the international theater of music.”

Seligman expressed his gratitude to Jamal J. Rossi, who has served as interim dean since April 2006, for providing leadership and shepherding the strategic planning process at Eastman.

“Jamal Rossi has my profound thanks for leading the Eastman School during this crucial transition,” the president said. “He has provided tremendous leadership and balance to Eastman and has spearheaded several new initiatives, including the planning of a major renovation of Eastman Theatre and accompanying improvements to the facilities of the Eastman School.”

For seven years, Lowry, the Thomas James Kelly Professor at the University of Cincinnati College-Conservatory of Music (CCM), has led a dynamic and comprehensive conservatory with eight divisions within a public research university. For almost 20 years before that, he excelled in teaching, performance, and academic leadership at the Flora L. Thornton School of Music at the University of Southern California.

Lowry’s compositional premiers and other musical work have taken him to venues throughout the United States and Asia as a guest conductor and clinician of orchestras and wind ensembles. At CCM, he is recognized as a builder of strategic partnerships locally, nationally, and internationally, and a recruiter of important faculty.

His initiatives in engaging communities in the arts connected the conservatory with the Cincinnati Symphony Orchestra to hold joint master classes and concerts, for example. The conservatory’s presence at the Opera Theatre and Music Festival of Lucca, Italy, has grown stronger with Lowry coaching and conducting there. He also has experimented with new media before nontraditional audiences, and has stood out as an innovator in his own work for orchestras, repertory theaters, and multimedia installations.

“The immediate challenge will be to take a deep dive into Eastman’s vision for its future as we work together to draft its strategic plan,” explained Lowry about his new role. “Eastman offers a world-class artistic and educational experience, a legacy that must be sustained and enhanced. It has courageously rethought what a higher education in music means and converted that into a riveting curriculum. Eastman will now probe into the very nature of music in the 21st century in an effort to catalyze music’s continued relevance.

“In the coming years, Eastman will take a hard look at the breathtaking changes in the way that music is experienced and consumed, and examine the emerging relationship between music and other art forms, particularly new media. However, we will not waver from the Eastman hallmark: the very highest standards of artistry and scholarship. On these and more, Eastman will continue to play an international leadership role. I am thrilled to be a part of that future,” said Lowry.

“The committee was fortunate to be able to assess the international landscape of musical leadership in its search for a new dean,” commented Burgett. “Douglas Lowry emerged as a powerful voice for music in America and the world. He possesses superb musical taste and judgment; has remained active as a composer and conductor; is sensitive to the worlds of faculty and students; and is fluent in the complex organization of the professional music school within a research university. The committee strongly endorsed his candidacy, salutes his appointment, and looks forward enthusiastically to his leadership as dean.”

The Eastman School of Music of the University of Rochester educates talented musicians from around the world who become leaders and innovators in all fields of music. Established in 1921 by Eastman Kodak Company founder and visionary George Eastman, the school has achieved international prominence through its commitment to the highest standards of artistry, scholarship, and leadership.

In his years in Cincinnati, he has served on the boards of community and music organizations, including the Cincinnati Symphony Orchestra, Cincinnati Opera, and Cincinnati School for the Creative and Performing Arts. He also has served as a co-host of WVXU’s “Around Cincinnati,” a radio program focusing on the arts and entertainment in the Greater Cincinnati area.

The search for a new Eastman dean followed the resignation of James Undercofler, who is now president and chief executive officer of the Philadelphia Orchestra. A graduate of the Eastman School, Undercofler served as dean from 1997 to April 2006. 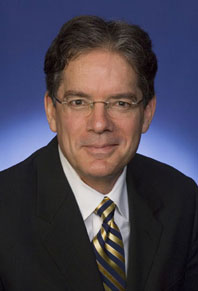 About the University of Rochester
The University of Rochester (www.rochester.edu) is one of the nation’s leading private universities. Located in Rochester, N.Y., the University gives students exceptional opportunities for interdisciplinary study and close collaboration with faculty through its unique cluster-based curriculum. Its College of Arts, Sciences, and Engineering is complemented by the Eastman School of Music, Simon School of Business, Warner School of Education, Laboratory for Laser Energetics, Schools of Medicine and Nursing, and the Memorial Art Gallery.