CELEBRATING THE MUSIC OF VERNE REYNOLDS

Eastman professor emeritus Verne Reynolds celebrated his 80th birthday in July 2006, and the School at which he taught for 36 years is paying tribute to him with a special concert on May 9 at 7:30 p.m. in Kilbourn Hall. A distinguished horn player and teacher, Reynolds is also a prolific composer, and the May 9 concert offers some substantial selections from his portfolio. All of the performers are Eastman alumni.

Reynolds taught horn at the Eastman School of Music from 1959 to 1995. He performed in the Cincinnati Symphony Orchestra from 1947-1950 and was principal horn of the Rochester Philharmonic from 1959-1968. He was named Kilbourn Professor at the School for 1982-1983. Many universities, soloists, and chamber groups have commissioned his compositions. His music is published by G. Schirmer, Carl Fischer, and Southern Music, Inc.

The program consists of: 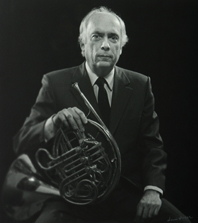